What's Good in the Hood? 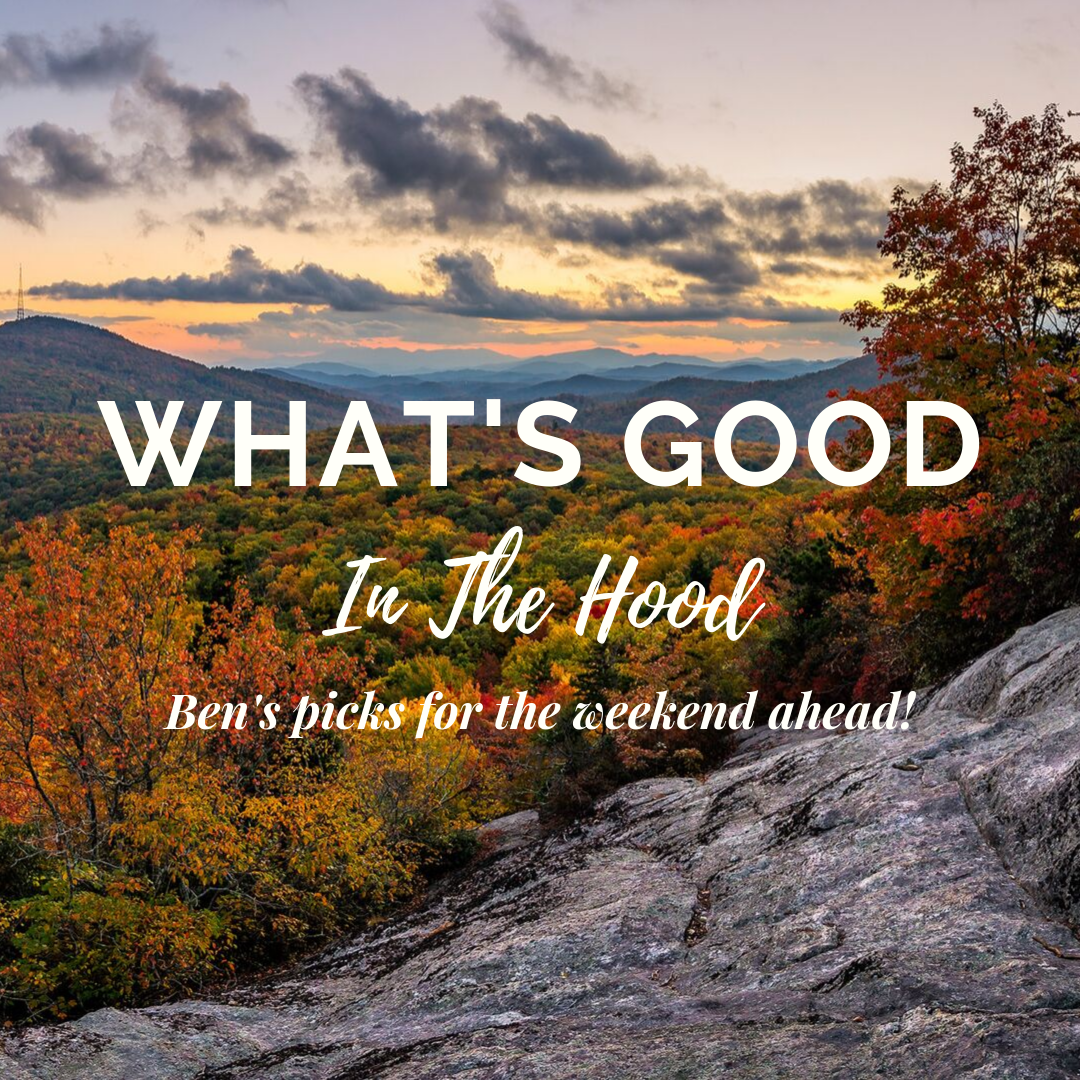 It’s time to make those weekend plans! Ben Mansell, REALTOR® is here to help by sharing his recommendations of what NOT to miss in the weekend ahead! 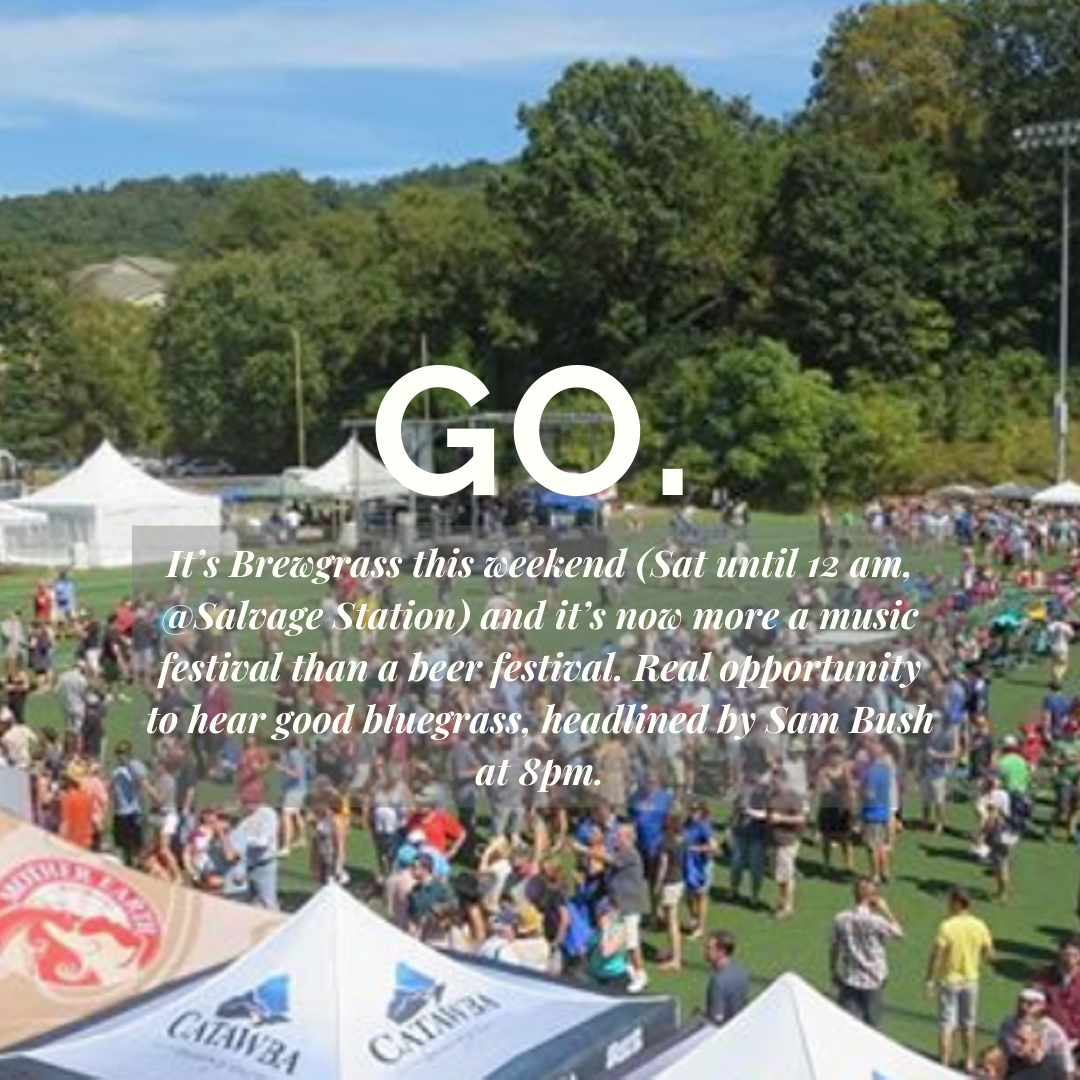 It’s Brewgrass Festival this weekend (Saturday until 12AM the Salvage Station) and it’s now more a music festival than a beer festival. Real opportunity to hear good bluegrass, headlined by Sam Bush at 8PM!

Western North Carolina’s original craft beer festival, Brewgrass Festival, will return Saturday, October 5th, 2019 for its 23rd annual celebration. This year’s event, which will take place at the Salvage Station, located at 468 Riverside Drive in Asheville, North Carolina, will embrace a different format. Its direction will shift, focusing heavily on showcasing regionally and nationally known bluegrass acts and will no longer have a traditional beer tasting that has become the hallmark of beer festivals across the country.
When Brewgrass was the only local and regional showcase of the region’s soon-to-be booming craft beer scene. As the years progressed, what once was an intimate event grew steadily to become a 4000+ person beer festival, spotlighting fifty plus breweries and as well as a launch for up-and-coming bluegrass artists. Yet, since the inaugural celebration in 1996, the national craft beer culture has changed. To give this Asheville festival staying power, 2019 marks the beginning of exciting change. This year Brewgrass will officially transform from a beer festival with great bluegrass to a music festival to reflect the incredible Asheville music scene..

This year’s music lineup will include such headliners as the Sam Bush Band, Unspoken tradition, Jaime Kent, and Sanctum Sully. More artists will be announced and added to the festivities leading up to the big event. 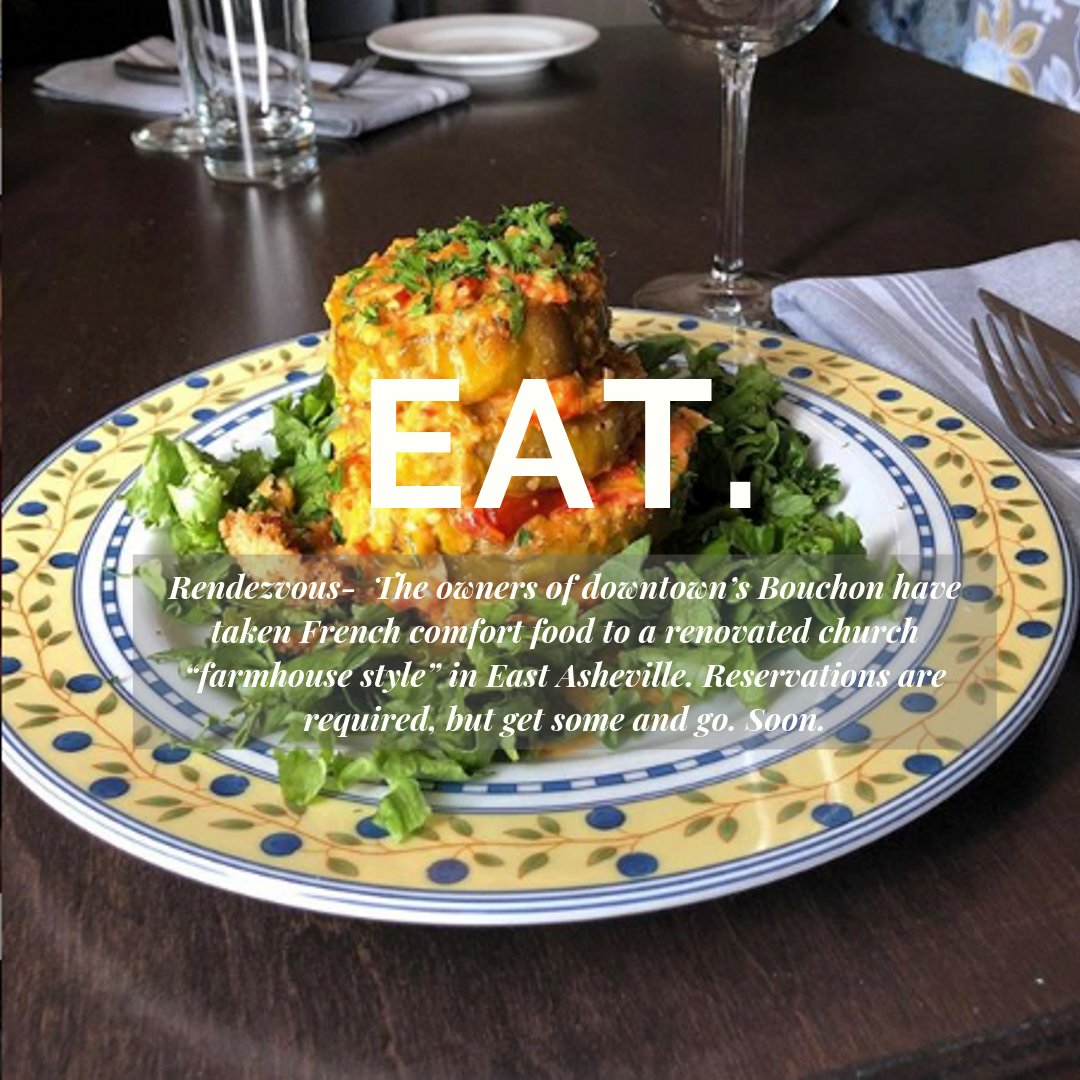 RendezVous Asheville - The owners of downtown’s Bouchon have taken French comfort food to a renovated church “farmhouse style” in East Asheville. Reservations are required, but get some and go, soon.

RendezVous owner, Michel Baudouin, grew up on 200-year-old farm near Lyon, France. His mother had a reputation as a great cook; so, he decided he wanted to bring that same kind of French home cooking to Asheville.

After many years downtown at Bouchon, and after befriending many of the locals, Michel wanted to give a little something back. So, when the opportunity for another little farm house-style restaurant came about, he bought a church in Haw Creek. This restaurant is away from the busyness of downtown, in a quiet neighborhood, where the locals can come and relax without worrying about parking, or hurrying to beat the crowd. There are Petanque courts to play on, there will be chickens to take care of, and wonderful French comfort food to dine on. We hope you enjoy it as much as he does. Bon Appetit, Ya’ll! 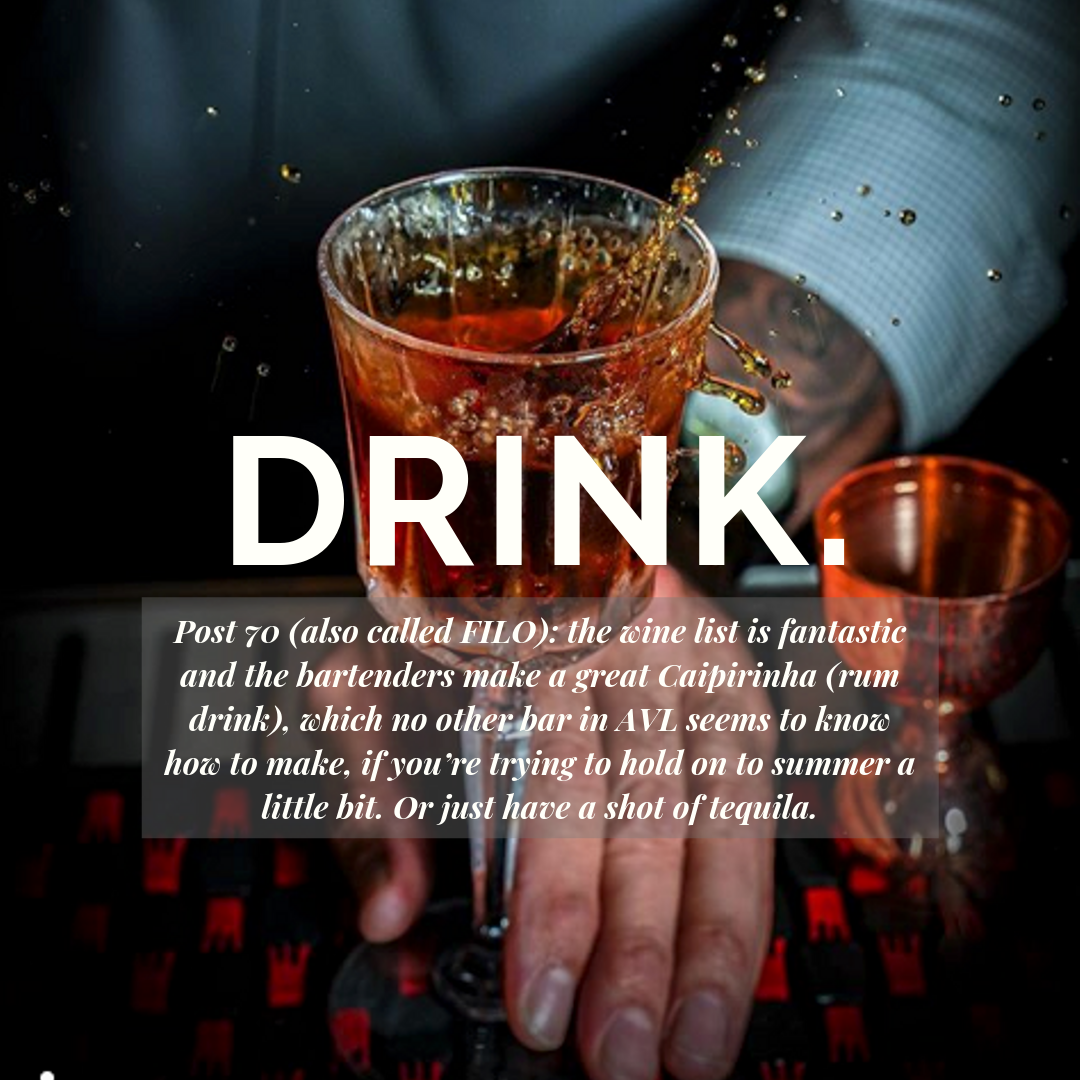 Post 70 (also called Filo Pastries): The wine list is fantastic and the bartenders make a great Caipirinha (rum drink), which no other bar in Asheville seems to know how to make, if you’re trying to hold on to summer a little bit. Or just have a shot of tequila.

The Filo and Post 70 concept is a combined bakery & café by day and tapas bar with full beverage and cocktails menu by night. On Tunnel Rd in East Asheville, we’re just off the Blue Ridge Parkway and conveniently located across from the Charles George Veterans Administration Medical Center. 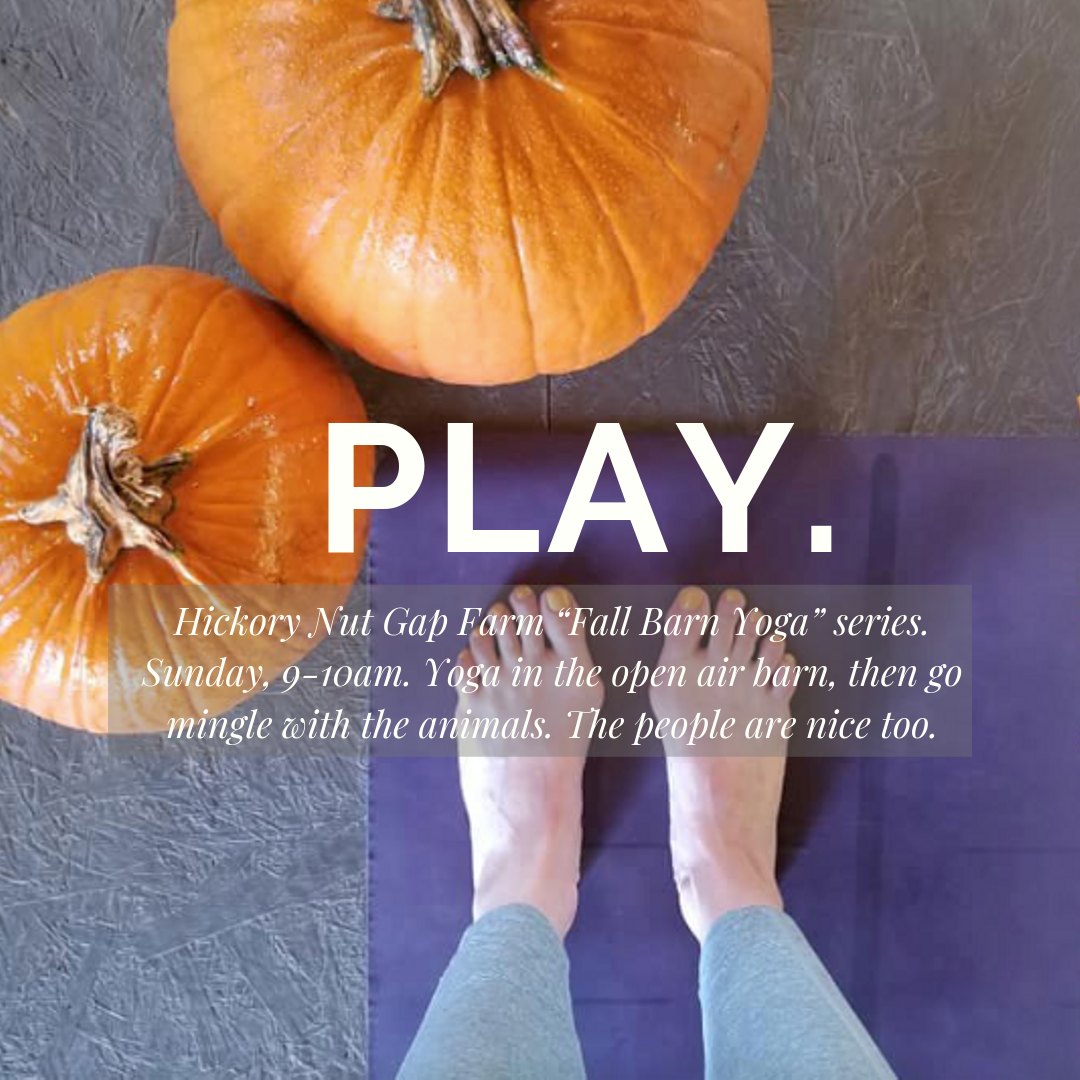 Hickory Nut Gap Farm “Fall Barn Yoga” series. Sunday, 9-10AM. Yoga in the open air barn, then go mingle with the animals. The people are nice, too.

Fall Barn Yoga Series Elevate your yoga practice by surrounding yourself in an atmosphere away from the hustle and bustle, immersed in fresh morning mountain air, with the gentle sounds of nature and serene farm animals.

Each Sunday morning, Mary Beth (from Pure Yoga Asheville) will be guiding you through a powerful hour of gentle vinyasa flow yoga. This style of yoga allows for modifications and is suitable for all ages and skill levels. Beginners are encouraged to come and give it a try. 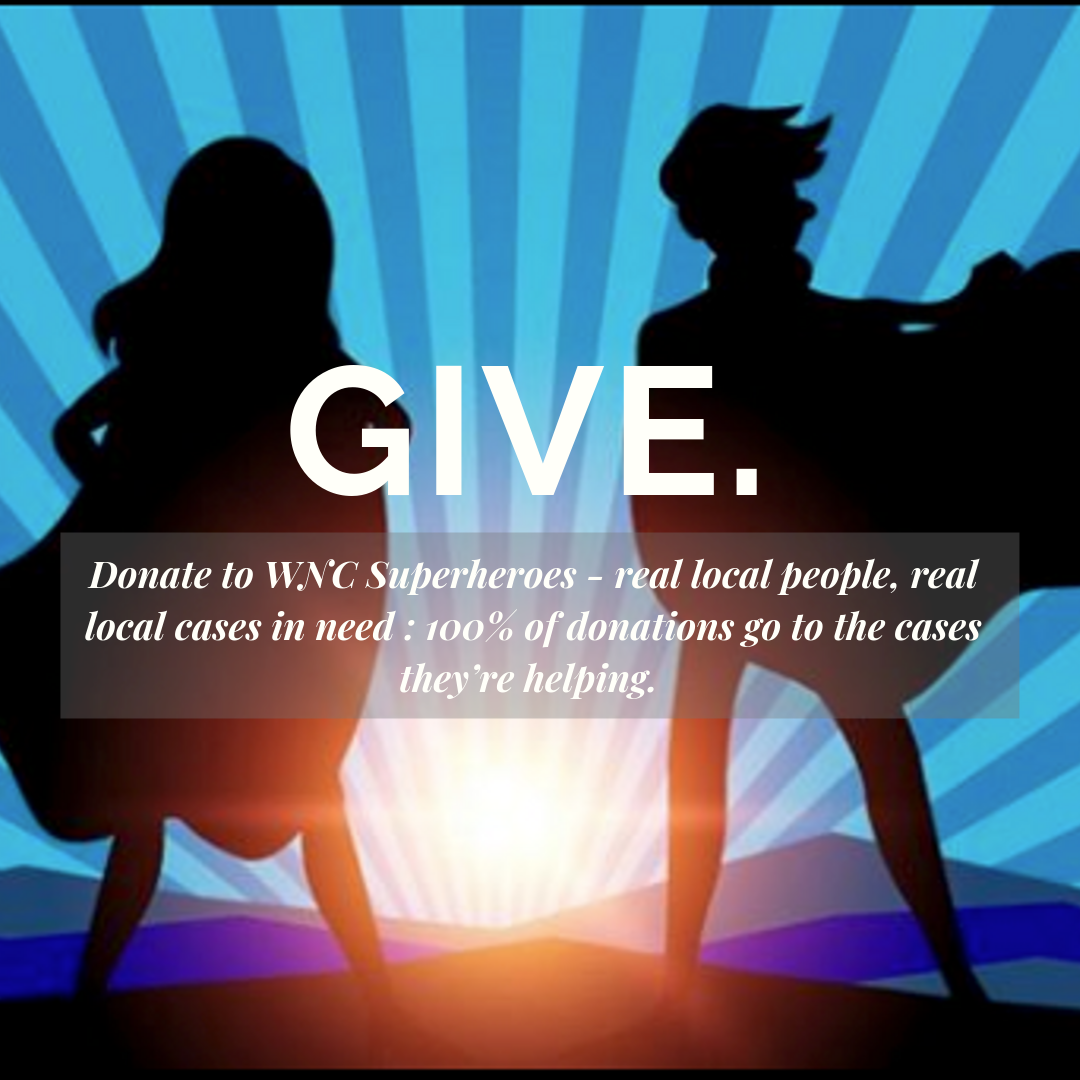 Today, there is a large segment of the population who is living on the financial edge. Some of us have friends or family we can call on in a time of need, but many do not. Some acute problems need to be solved quickly to provide the most significant benefit, and that is where WNC Superheroes focuses.

WNC Superheroes serves, to put it simply, those in acute crisis.

When a potential client contacts WNC Superheroes, a trained volunteer will evaluate the possible case and if the need fits our mission our team gets to work. The case will be posted on social media sites, emailed to our supporters and push notification sent to our supporters with the WNC Superheroes app on their phones. Once the need has communicated a trained volunteer will interface with the client to address the need. We are the quick fix after the immediate crisis is solved we evaluate the needs of the client and ensure they are receiving all of the help that is available.