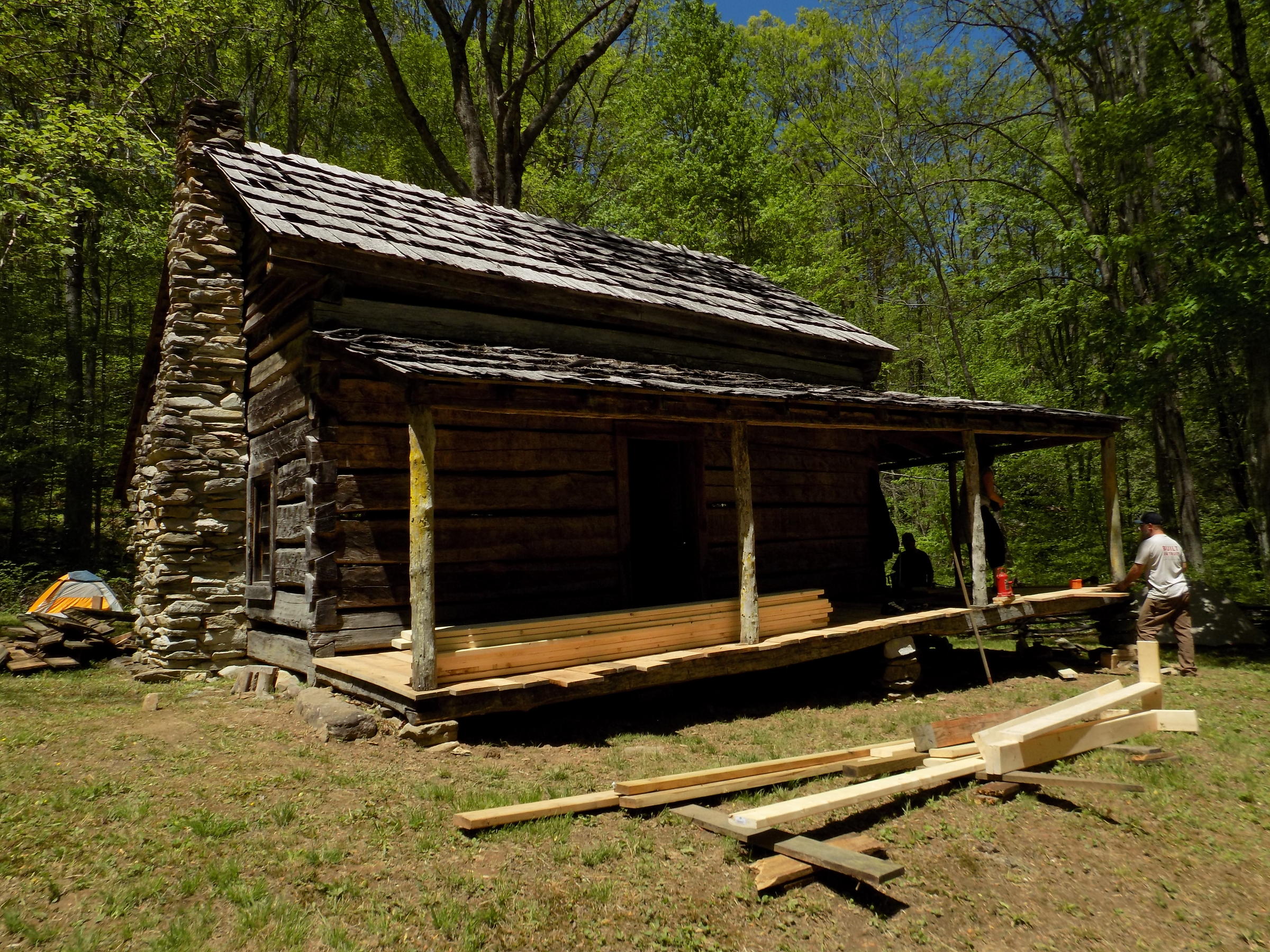 Sometimes work doesn’t feel like work.  That was the case for an Asheville contractor and his employees last week as they rehabbed an historic cabin in the Great Smoky Mountains National Park.

It takes a while to find the Cook cabin in Little Cataloochee.  A long while. The roads go from asphalt to gravel and then finally dirt.  That last portion can only be accessed via a two-mile hike on foot along the Little Cataloochee Trail - or by vehicle but only if you have the key to the gate.  “My name is Sean Perry the president of the Hands of Sean Perry Company out of Asheville, North Carolina.”

In addition to being a contractor, Perry also likes to bike and hike the Great Smokies.  During one of his excursions deep into the woods, Perry came across the historic Cook cabin. “I believe this was likely the first structure built in Little Cataloochee by Dan Cook in the 1850’s.  Dan and his wife came over from Big Cataloochee which was getting a little too populated at the time.”

Essentially, this was that era’s equivalent of a two-level house in the suburbs.  It somehow survived when both Cataloochee’s disappeared as the area became part of the Great Smoky Mountains National Park in the 1920’s and 30’s.  “That was part of the deal with the park taking over.  They ignited all of the structures in the Cataloochee’s just to destroy them.  Their goal was to turn this back to wilderness.”

Trees have reclaimed the ground that was once farmland around the cabin, leaving it hard to imagine that this area was once entirely cleared of them.  Upon discovering the Cook cabin, Perry noticed a lot of rot, particularly in the wood that made up the expansive porch.  So, he volunteered his services to the Park.  “This is what I do for a living.  And I have such a passion for this place.  I so appreciate the people who had to leave this land.  And they left it for us.”

Perry and his employees spent the week camping at the cabin, with the morning and early afternoon hours set aside to rehabbing it.  “We have gone around the three-sided porch and removed all the existing decking, removed all the rotten framing and one pretty significant locust beam.  And replaced all those elements.”

Perry’s crew does have one advantage the Cook family did not. “They had to craft every one of these logs where we have to power tools to rip through everything.  I kept joking with the guys in the meeting leading up to this that we should hand saw all this.  And then I realized the Park was giving us three-by-six oak joists and I thought we would pass on that.”

To keep the 1850’s appearance of the cabin, the Park Service provided Perry with period-looking nails.  His crew put 'character cuts' in each piece of wood to make them look like they were hewn with axes.  Work wrapped up each day in the early afternoon when lunch was served.  This day it was lamb stew prepared by Perry’s mother.  Asheville restaurants also donated food for the week, treating the workers to pork belly and noodles and beef brisket Bolognese and gnocchi – not your average camp food.  There was plenty of time after lunch to hike and explore the area, which includes the pristinely preserved Little Cataloochee Baptist Church, built in 1889.  Its bell still works.  Perry says it was rung for every birth in the town, and for every death too – once for each year the person lived.  For Dan Cook it was rung 73 times.  He’s buried in the cemetery in front of the church.

It was a week where Sean Perry ‘worked’ rehabbing an historic cabin.  But he also got to camp outside, hike, eat well, bone up on the history of the Cataloochee’s, spend a lot of time with friends and family.  Doesn’t really sound like work. “For me it is 100% fun.  For me it’s all fun.”

And hikers in America’s most visited national park can now reap the benefits of that fun.