Do you have what it takes?!? We are calling all members of the Divine Nine to come and Stomp, Stroll, and Set It Off! Winners will receive cash prize!

Stepping or step-dancing is a form of percussive dance in which the participant's entire body is used as an instrument to produce complex rhythms and sounds through a mixture of footsteps, spoken word, and hand claps. Though stepping may be performed by an individual, it is generally performed by groups of three or more, often in arrangements that resemble military formations.

Join us for Hair-I-Tage, A Journey Through Hair, Goombay's First Annual Hair Show Competition. There will be a cash prize for the winner! What a tremendous way to showcase talent, gain more exposue, and show us your heritage through hair.

Downtown Parade (10am) in Triangle Park 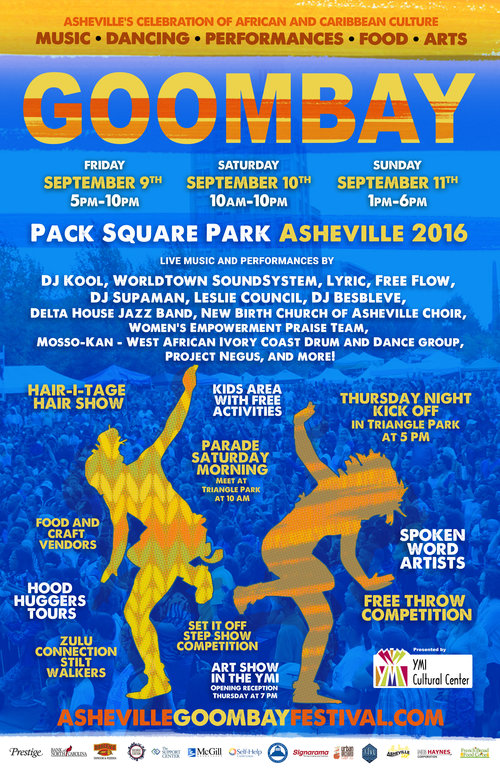 For over 36 years, Goombay Festival has celebrated the people, music, and culture of African & Caribbean heritage in Western North Carolina.

The City of Asheville ranks Goombay Festival as one of four local anchor events where families, businesses, and communities from across the Western North Carolina region gather. Goombay Festival was created to celebrate the richness and diversity of the African Diaspora and Asheville’s African American community. The festival attracts over 10,000 people throughout the weekend, and garners national media coverage. Goombay Festival lives up to its West African name meaning of “rhythm or drum” with eclectic sounds, vibrant, multicolored sights and the tantalizing aroma of exotic foods reflecting a multiplicity of cultures and traditions.

About The YMI Cultural Center (YMI)

The YMI Cultural Center is arguably one of the nation's oldest African American institutions. The YMI evolves in response to the changing landscape of real time and the future. It supports cultural, social, economic awareness which remains sentinel to the founding vision. With a careful eye on the historical context shaping the contemporary needs of its users, its mission remains steadfast to the guiding principles and ancient rhythms of the ancestry it promotes and preserves.

From the display of intriguing exhibitions, the incorporation of the VITA (volunteer income tax assistance) program to asset management and the rhythmic and soul-stirring West African Dance and Drum classes, the Center stands firmly committed to promoting the original vision of the founders, “to improve the moral fiber” which also supports a positive sense of self among the community it was founded to serve.