Postcard of Pack Square in 1904 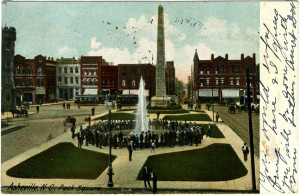 This postcard, bearing a colorized version of an Asheville photographer’s picture of Pack Square, helped answer the question of who shot the photos in the 1904 album.

Editor’s note: When CPP published this article on Jan. 15, the identity of the photographer of the 1904 picture album was unknown. But after some additional days of sleuthing in the North Carolina Collection’s archives, librarian Zoe Rhine said she has identified the mystery shutterbug. 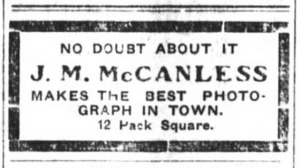 The photos, Rhine’s research indicated, were shot by James Melton McCanless, an Asheville photographer who kept studios on and near Pack Square from about 1890 to 1920. Surviving examples of his work indicate that he specialized in both intimate portraits and photos of large gatherings and Asheville-area landscapes.

Rhine said that one key to unraveling the mystery was a postcard published in 1906, which colorized one of McCanless’ photos of Pack Square from 1904; an original of the photo appears in the newly discovered photo album discussed and shown below.

To see more photos McCanless and his associates took in Asheville, visit this North Carolina Collection site and search for “McCanless” in the field marked “Creator.” 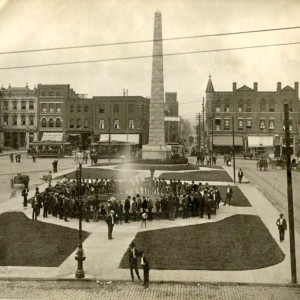 Pack Square 1904
One of the photos shows what appears to be an organized gathering of men in Pack Square, for a purpose unknown. Like many in the collection, it appears to be the work of a professional photographer seeking to showcase the town. Courtesy North Carolina Collection, Pack Memorial Library

ASHEVILLE — At first, the notebook-sized cardboard box that arrived in the mail was inconspicuous. But when it was opened, at Pack Memorial Library’s North Carolina Collection, local librarians’ jaws started dropping.

Inside were the delicate, partly frayed pages of a photo album prepared in 1904, with a handwritten title: “Asheville: The Mountain City in the Land of the Sky, Illustrated.” The album contained 34 mostly crisp black and white pictures that were new to the library’s staff.

“I was shocked,” Zoe Rhine, North Carolina Collection librarian, said. “They were ones I hadn’t seen before, and it was photo after photo. I never wanted it to end.

“I think this is the best donation we’ve gotten since I’ve been here,” said Rhine, who has worked at Pack since 1994. “It’s definitely up there at the top, and it was such a surprise.”

At present, the identity of the photographer is unknown; it doesn’t appear in the album. Rhine speculates the album was prepared as a kind of a book proposal for a project that apparently never came to fruition, as there’s no record of it today.

But the source of the donation, Carolina Public Press recently discovered, was a kindly fellow librarian from far away who’d found it by chance and given it to Pack on a whim.

She had no idea she was dropping a veritable time capsule into Asheville’s lap.

Seeing Asheville at the dawn of the century 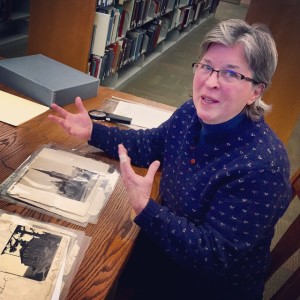 The pictures in the newly discovered album depict Asheville at one of its many historic turning points.

As it entered the 20th century, the town had a population of about 14,600. By 1904, it could boast of having three banks, six schools and 20 churches, along with nine miles of paved roads and 14 miles of electric streetcar lines.

“Asheville is a busy and enterprising city,” the 1904 Asheville City Directory proclaimed.

Evidence of just how busy and enterprising turns up in the photos, which show everything from classic buildings to public gatherings to everyday street life.

Rhine said that, together, the photographs offer new windows into what we can learn about what it was like in 1904 Asheville.

“Many of the scenes are just so lively, with so much going on,” she said.

While she and other library staff are still studying the images, and the public is getting some of its first looks, Rhine has already pinned down what appear to be fresh findings in the pictures.

One panoramic photo, for example, appears to have been taken from high in the old Buncombe County Courthouse, which stood on the eastern edge of Pack Square. The view, to the west, includes a rare rendering of the back side of the old City Hall and City Market. On the left side of the picture, Rhine has identified what appears to be a pre-automobile downtown parking lot — the spot where farmers put their wagons while at market.

Another picture, shot from the old Battery Park Hotel (which would be felled by fire and demolition in the early 1920s), shows what appears to be a set of greenhouses on the hotel’s grounds. “I never knew they had that going on,” Rhine said.

Other highlights include what Rhine described as one of the first, best photos of the Y.M.I. on Eagle Street, and the only photo she’s ever seen of a once-prominent Methodist church on Chestnut Street that served an African-American congregation.

The church was designed by the famed architect Richard Sharp Smith but demolished in the early 1930s. Until now, Rhine said, she’s only seen architectural drawings of the building.

The North Carolina Collection recently digitized the album; see it in its entirety below.

Whoever prepared the photo album, and for whatever purpose, it took 110 years for it to wend its way to the local library’s history collection. And as it happened, the album narrowly escaped the recycling bin of history.

One day in 2013, Lucy Menard, a school librarian in Albany, N.Y., was perusing “a kind of junk shop” and found a box of mostly local ephemera for sale, she told CPP. Curious, she bought the box for $5. Sifting through it, she found Albany-area cards, stationery, playbills and the like, but one non-native item stood out: the 1904 Asheville photo album.

Menard then called someone in the Buncombe library system (she can’t recall whom), and asked if they’d like to have the album. “We’d have to take a look first,” she said she was told.

So Menard scanned a few images and tried to email them, but the message bounced back for some reason, and she put the Asheville picture book aside.

“It sat in my house for at least a year; I’m a bit of a hoarder,” Menard said. But one day last fall, she set about gleaning and came across the album again.

“I was just about to throw that thing into the recycling,” she said. “But then I thought that, even if they already have a copy, maybe they can use another.”

In her surprise package to Pack, Menard added a quick note: “Thought you might want these for the local history archives.”

After learning about the splash the photos have made in the North Carolina Collection, Menard said: “It’s cool that this turns out to be such a hot find. So many things had to happen along the way for it to finally find a home.”