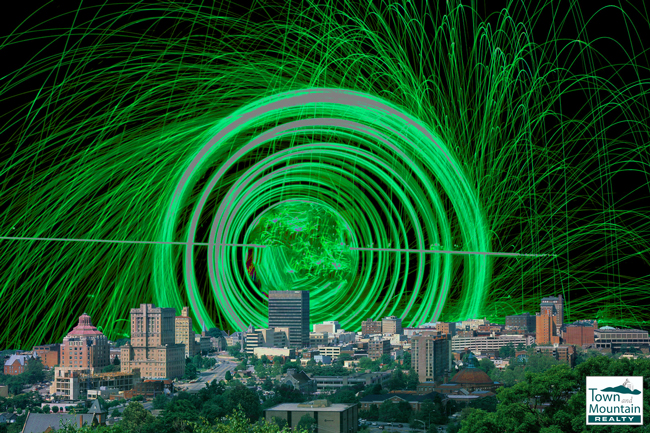 There is a lot of innovation happening in Asheville (blame the vortex?) - Redevelopment opportunities ahead for Charlotte Street, South Slope and River Arts District!

"I think it's indicative of this project in general," said Ben Myers, founder of the Athens, Ga.-based 1000 Faces Coffee, and now part of the Vortex ownership team. "It does have this really special quality to it, even the word association with 'vortex,' and Asheville, supposedly, being a vortex."

"It has lots of connotations," said Patton, when asked what's behind the name of his doughnut shop. A vortex is generally drawn as a spiral, like looking into the wide end of a tornado -- or, Patton said, "Sort of like a doughnut."

In Douglas Adams' "Hitchhikers Guide to the Galaxy," getting tossed into the Total Perspective Vortex was a mind-blowing experience which showed you that every piece of matter in the universe is intertwined.

"For when you are put into the Vortex you are given just one momentary glimpse of the entire unimaginable infinity of creation, and somewhere in it a tiny little marker, a microscopic dot on a microscopic dot, which says 'You are here.'" wrote Adams.

In cities like Asheville and Sedona, Ariz., the vortex has similarly new-age connotations. And some say what you put into the vortex is what you'll get out of it.

"Along this whole journey, Valerie and I have always joked about it," said Patton. "Something would happen and we would say, 'Oh, it's the vortex. The vortex has sucked us in. The vortex made this happen.'"

If you build it, they will come

Not long ago, little was happening in the South Slope, an informal designation for the area south of downtown, the heart of the district roughly bounded by Asheland, Biltmore, Southside and Hilliard avenues. Signs of early activity a decade ago included Green Man Brewery's tasting room on Buxton Street. The inconspicuous Prospect bar came next on that street in 2010, followed by the French Broad Chocolate Lounge's factory (which has a solar roaster on the roof).

A handful of breweries have since sprung up, peppering the area with enough local beer that some suggested calling the area the "Brewery District." But "South Slope" stuck.

Vortex Doughnuts was the first to sign a lease at nearby 32 Banks Ave., a warehouse rising from the ashes after decades of neglect. And then the rest of the neighborhood came flooding in.

In the coming few months, the slope will see a Raleigh-based specialty beverage shop, Tasty Beverage Company, open in the Chrysler Building between Banks and Buxton.

Soon to open in Vortex's building will be Catawba Brewery, a bar called Public School and then a barbecue restaurant by restaurateurs from the successful Chai Pani and the James Beard Award-nominated Elliott Moss.

Ask Myers if the South Slope is becoming a vortex of businesses and talent, and he doesn't blink.

"Totally," he said, laughing. The South Slope area is becoming a "positive energy center and a place of creation."

So, if you build in the vortex, they'll come? Possibly.

"Our architect told us when we moved here: 'You don't find Asheville, Asheville finds you,'" said Patton.