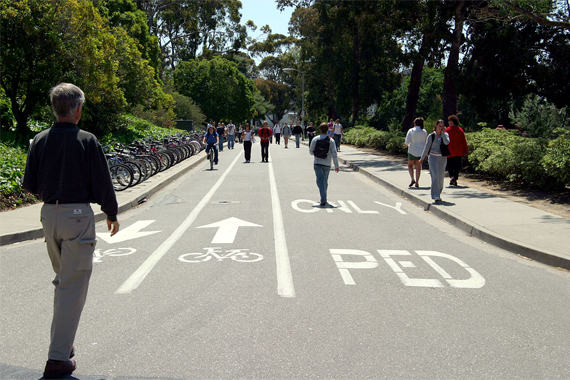 Car shares, bike shares, improved rapid transit and teleworking. All are the product of a new generation that is more environmentally conscious than any before it and more willing to use its own energy to get around town, rather than tapping expensive energy sources.

Millennials prefer urban cores, even ones outside of major metropolitan areas, because they want to be able to walk or bike to work and stores. In turn, areas that offer so-called walkability should see more home buyers and renters than those that don't.

"Cities that want to thrive in our new economic and demographic realities will need to find ways to create and support more of these dynamic, productive walkable districts that are in high demand," said Geoff Anderson, CEO of Smart Growth America, which, in conjunction with George Washington University School of Business, released a new report ranking the walkability of the nation's 30 largest metropolitan areas.

There is, in fact, already a distinct correlation between walkability and real estate values, both commercial and residential.

"Walkable, urban for-sale housing is by far the most expensive housing in the country. The range depends on the market, between 40 percent and 200 percent greater than drivable, suburban housing," said GWU's Chris Leinberger, author of the report. "Twenty-five years ago that relationship didn't exist because walkable (cities back then) was not valued."

Home values have bounced back higher and faster in walkable neighborhoods than in the so-called exurbs.

Washington, D.C., wins as the nation's most walkable city, according to the survey, which looked at the share of office and retail space located in a city's "WalkUPs" -- walkable urban places -- through the first quarter of 2014. A city can have several different WalkUPs within its limits; metro New York contains 66, while San Antonio has just two.

WalkUPs still occupy a relatively small portion of the 30 cities' land, just 1 percent on average. Still, these areas offer outsized economic benefit, according to the survey.

Commercial office space in walkable areas has an average 74 percent price-per-square-foot premium over suburban business parks, according to Leinberger. For apartments, there is a 70 percent rental premium on walkability. That is likely why, in the current real estate cycle, 85 percent of all rental apartments have been built in walkable urban places.

In Washington, researchers identified 45 WalkUPs that occupy just 1 percent of the metro's acreage but account for 48 percent of its new office, hotel and rental apartment square footage. D.C. is also the only metropolitan region that has more than half of its WalkUPs in its close-in suburbs (which are classified as part of the metro market). Suburbs like Bethesda, Md., and Crystal City, Va., are seeing huge commercial development and rising real estate values, thanks to their focus on the new urban, walkable core.

In Crystal City, developers are luring tech start-ups, selling them on the walkability of the area.