By applying smart concepts and green technology, you can have a compelling, fulfilling life that allows you to live within your means financially and environmentally.

Here are some amazing & green home design innovations from all over the world! 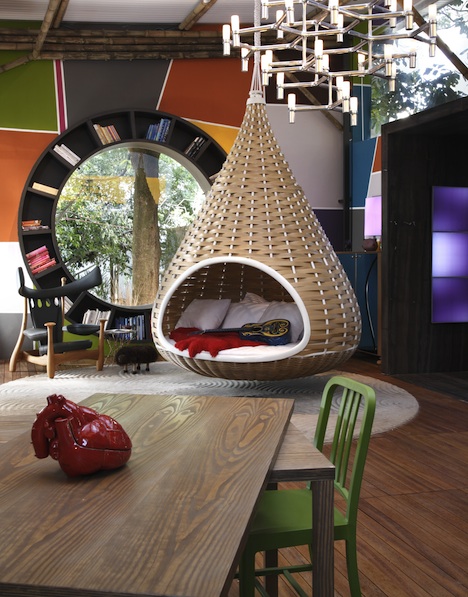 Although interior design events in Latin America are always full of huge museum rooms thought for impossible houses, it's good to see the trend of small spaces popping up in places like Buenos Aires and Sao Paulo.

This 600 sq. foot recycled cabin by Brazilian designer Fabio Galeazzo presented at the last edition of Casa Cor Sao Paulo is another one of such spaces, and presents some very cool features.

Asked to make use of an old cabin that was already at the city's Jockey Club --venue of the event--, Galeazzo decided to retrofit the place adding a new, visible bamboo structure both inside and outside the place (photo above).

He then sought to create a space that had the simplicity of traditional cabins with some of the comforts of modern living. Named 'Urban cabin', the space has only 600 sq. foot, but thanks to a clever blending of outdoor and indoor space, it looks bigger.

One of the most interesting elements of the place is the prototype of a revolving kitchen that allows the user to cook and attend guests both in the dinning room table or in the outdoor patio.

Although the piece of furniture is only a prototype, looks pretty big, and is not entirely functional, it's an interesting turn on the subject of re-thinking the kitchen.

Even though the designer didn't necessarily got rid of the bed, he blended it in using Dedon's nestrest (first picture).

Usually advertised more like a chilling area for luxurious outdoor spaces, this piece makes sense here not disrupting the living room with a bed room or a bed. Frankly, also making the space look a lot more fun and cool.

The space makes use of responsible materials such as wood from sustainably managed forests and furniture from designers such as the Campana Brothers.

Although the chances of living in a cabin in the city are pretty narrow, the space has some neat ideas to pick from.

The $1 million studio with hidden rooms

Paying $1 million for a studio may seem high, even by Manhattan standards, but this 420-square-foot space collapses, folds, and rolls to transform into a master bedroom, home theater, dining room for 12 and even a guest room.

Designed by LifeEdited founder Graham Hill, the apartment was created to show how much functionality could be added to a small apartment. With the success of this apartment, Hill is bringing the concept to new apartment complexes in both Brooklyn and Sao Paulo, Brazil.

The founder of Treehugger.com, Hill believes, "One of the easiest ways to go green is really just to go smaller" -- and that's exactly what this apartment does.

The main room contains a thick rolling wall -- like those commonly found in large libraries -- that sits on a track. The wall is made up of cabinets, drawers and a standing desk. Roll the wall out, and it reveals two bunk beds hidden behind it, along with storage closets and a desk for guests. There's a Murphy bed in the main space and the kitchen counter hides a small table,which can be pulled out and expanded to accommodate up to twelve people.

Check out the Video Here