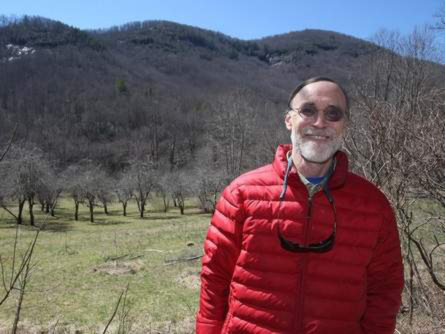 John Myers and his wife, Jane Lawson, not in photo, donated nearly half the value of their 103 acres to CMLC to protect a large swath of the Hickory Nut Gorge.

GERTON -- Trail runners, hikers, birders and waterfall lovers will have new stomping grounds this summer, thanks to three landowners who have donated or sold almost 130 acres in the Hickory Nut Gorge to the Carolina Mountain Land Conservancy.

A crew of trail builders from the Vermont Youth Conservation Corps, along with contractor Trail Dynamics, have almost finished the first phase of the 3-mile trail. It climbs 650 feet along its mile length to a 100-foot cascade called Little Bearwallow Falls, which pours down a sheer rock outcrop.

When the second and third phases of the trail are completed by late 2015, hikers will be able to get up close and personal with Wildcat Rock's granite outcroppings and traverse the main ridgeline of Little Bearwallow Mountain through mature forests of poplar, birch and chestnut oak.

"It's going to be one of the most spectacular sections of trail in the region because it's going to parallel the cliff band as it ascends Little Bearwallow," said Peter Barr, trails and outreach coordinator for CMLC.

The Wildcat Rock tract is not the first piece of Hickory Nut Gorge that landowners John Myers and Jane Lawson have protected through CMLC. The couple put 35 acres of their adjoining Hickory Nut Forest Eco-Community in a conservation easement in 2006.

Standing in an orchard at the base of Little Bearwallow, Myers said he and his wife were looking for a smaller piece of paradise when they discovered the 230-acre property in Gerton they eventually bought in 2004.

"All we wanted was a little 5-acre parcel in the mountains," smiled Myers, who worked for land trusts in the Northeast for 18 years.

To afford the larger tract, the couple carved out solar-friendly sites to market for "green" homes and eventually built the Laughing Waters Retreat Center, where they host weddings, family reunions and conferences.

"A typical developer could've put homes on 80 percent of the land," he said. "We put homes on 10 percent of the property. Since I worked for trails groups, my initial vision was a trail network that connected our property with others in Gerton. I shared that vision with CMLC a few years ago."

He credits Barr with putting that vision "on the front burner," with CMLC eventually securing funds to purchase the land from philanthropists Fred and Alice Stanback, the Donald Jones Foundation, the Conservation Trust of N.C. and the Fernandez Pave the Way Foundation.

Meanwhile, Myers' neighbor, Mary Beth Brock, had her own dreams about protecting her 31-acre property, with its views of Chimney Rock State Park's granite monolith in the distance.

She and her husband bought two pieces of property in 1990 and lived in temporary quarters -- tents and a retrofitted backyard storage barn -- until they could build a house in 2005. They bought the second parcel to protect it from development, and invested thousands in treatments to save the land's Carolina hemlock trees from an exotic bug.

"I am a tree hugger from way back," said Brock, a former occupational therapist. "To me, the charm of that property is the hemlocks, and it just broke my heart when the (hemlock woolly) adelgid reached our area."

After Brock retired following her husband's death, she found it challenging to afford the property taxes from her home in South Carolina and here. So she began to investigate donating 25 acres of the steep, rocky land below her mountain home to the land trust.

When she heard that Myers and Lawson had committed to protecting their land, "it spurred me to get on the ball and get moving. When I talked to CMLC, they suggested that we combine the two projects and make it one, to do the land survey and assessments together so it would save funds. It just made sense."

Those assessments found the combined 128 acres contained rare natural communities, including "high-quality rich cove forest which approaches old-growth," and rare or uncommon species such as a lampshade spider species, green salamanders and ravens. About 1,177 feet of streams flow through the property as well.

"I definitely think this is one of the highest-priority conservation tracts in the upper Hickory Nut Gorge," Barr said. "It's a homerun, not just because it's got such important conservation value, but also because it's a critical tract for connecting trails and protecting public access for recreation."

The Wildcat Rock and Chimney View projects were among 21 properties that CMLC protected in 2013 totaling 2,420 acres, the most ever in one year by the land trust. Now in its 20th year, CMLC has saved more than 27,000 acres of mountain lands in Western North Carolina.