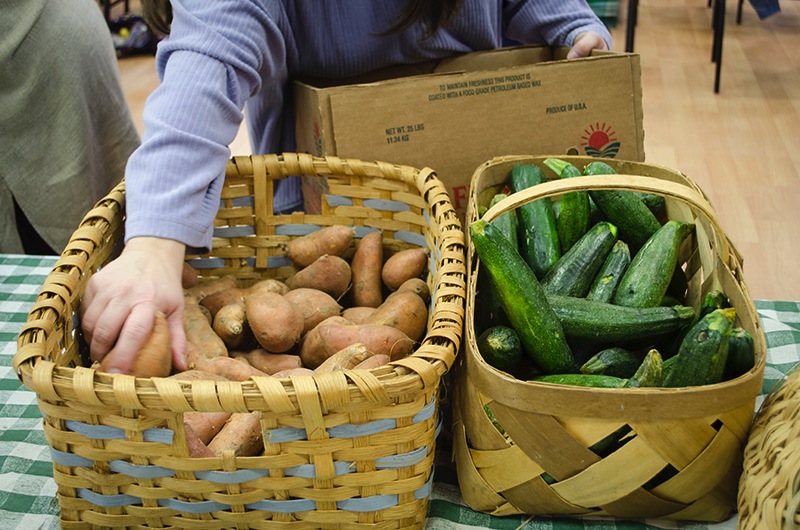 Growing Solutions: Food insecurity in Buncombe County and the surrounding regions may be on the rise. But with a new season brings a renewed effort from local community gardens, who are fighting hunger with food and a sense of belonging. (Carrie Eidson/ Mountain Xpress)

Spring is approaching and across Western North Carolina farmers and growers are eagerly anticipating getting their hands back in the dirt. Soon local produce will pack the aisles of grocery stores and the tables of area farmers markets. But for some in WNC, obtaining fresh, local food is not as easy as a trip to the market.

"People sometimes have a hard time wrapping their heads around the idea that a lot of people in our area just don't have access to the food they need," says Becky Upham, communications director for MANNA FoodBank.

According to the 2013 Map the Meal Gap study by the national nonprofit Feeding America, nearly 15 percent of residents in the 16 counties MANNA serves are experiencing food insecurity, leading more than 100,000 people -- including 38,000 children -- to seek emergency food aid. Another way to look at it: In North Carolina, one in four children and one in 10 seniors are living in poverty, according to a 2012 study from the U.S. Census Bureau.

But if food insecurity is a growing problem, some across the region are working on a growing solution. Community gardens -- locally focused, volunteer-driven initiatives -- are fighting hunger literally from the ground up. And beyond raising food, community gardens are growing something else to: public awareness, wellbeing and a sense of belonging. 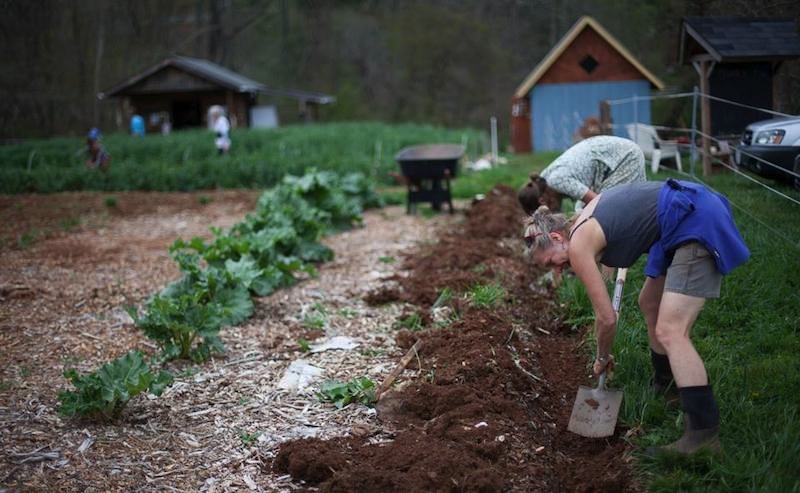 Growing community: The Lord's Acre in Fairview isn't just growing food for hunger -- they're using their six acres to house many different community initiatives. "There is a space to adopt plots, a space for permacultre education, a space to learn about herbs," says executive director Susan Sides.. "We don't want to be closed to the ideas of the community." (Photo by Catherine Vibert, courtesy of The Lord's Acre)

The face of hunger

Grass-roots movements to combat hunger aren't new. During the Great Depression in Georgia, farmers would donate a portion of their yield to local churches to distribute to parishioners in need. Typically the amount was equal to the yield of about an acre -- known as the lord's acre. The spirit of that movement continued in Fairview and in 2009 inspired the creation of a volunteer-based community garden under the same name.

"We began because some folks who were on the boards of our local food pantries, who grew gardens themselves, thought it was a shame that the pantries didn't have fresh food," says Lord's Acre Executive Director Susan Sides. "We took on this name to keep the history of the lord's acre going."

In its first season, the garden produced 3 tons of organic produce for the Food for Fairview pantry. Since then, the garden has added on-site public education opportunities and a Share the Harvest Market, which distributes free produce from several local gardens. Last season, The Lord's Acre produced 9.5 tons of food, yet organizers fear that all this may not be enough.

In 2013, in partnership with AmeriCorps Project Conserve, the garden created a portrait of food insecurity in Fairview based on surveys, interviews and focus groups with pantry clients and volunteers, school personnel and social workers. The report, says Sides, found that due to such factors as low income, lack of transportation and embarrassment or shame about using food assistance programs, food insecurity in the community is growing.

"People will talk with us at our market about their struggles," Sides says. "Many say they're too proud to go to the pantries, or they didn't go because they didn't want to take food from someone who may need it more.

"The funny thing about a place like Fairview is that we've been turned down for grants, because the general perception is there is money here and so there shouldn't be a problem," she continues. "Food insecurity is here: It's just hidden. But I see it everywhere."

It seems food insecurity may be increasing outside of Buncombe County too. Amy Grimes Sims, executive director of The Community Table in Sylva, says her agency's food pantry and dinner service are feeding more and more people each year. "Every year we break a record," Sims says. "We've always had generational poverty in Jackson County, but now we're seeing more situational poverty."

Unexpected medical costs, high winter heating bills and increased restrictions on food stamp eligibility can force hard choices concerning which necessities to pay for, Sims says. And something the public should realize, she adds, is how quickly these factors can lead to food insecurity. "Even if you have a job, even if you have insurance, if you become sick or are injured and have to miss work, just one medical problem can throw your entire life into complete crisis."

Started in 1999 as an outgrowth of the now-defunct REACH of Jackson County, The Community Table receives donations from MANNA, the Sylva Wal-Mart and the Sylva and Cullowhee community gardens. Last year, the nonprofit served an average of 137 meals per night and provided fresh, organic produce grown at the gardens.

"Fresh produce is invaluable," says Sims. "It's one of the most expensive things to buy, especially organic produce, so there's a reason obesity and poverty go hand in hand. Without the community gardens a lot of people in our area would not have access to organic produce." 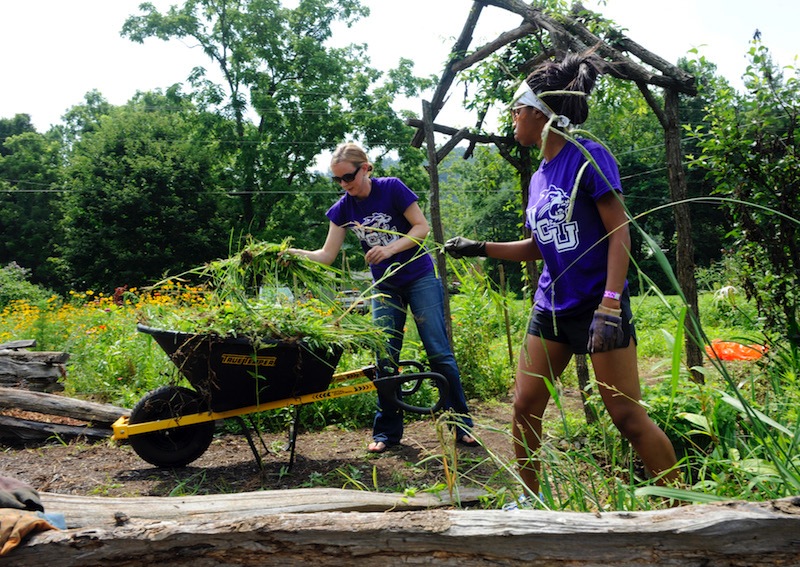 Growing knowledge: Sylva Community Garden volunteer Jennifer Cooper says a community garden is a place where people from many walks of life can grow and learn together. "Not everyone who is coming into the garden has the same amount of experience," Cooper says. "But we have experienced gardeners here -- volunteering their time -- who are able to teach them. It's really cool to see people sharing knowledge." (Photo by Ashley Evans, courtesy of WCU)

The Sylva Community Garden, a third-of-an-acre plot located just off the town's main street, was founded in 2005 to grow food for The Community Table. The volunteer-led effort now works on an allotment model, with growers keeping 50 percent of their yield and donating the rest -- though this is not a hard rule, says volunteer Jennifer Cooper.

"Some gardeners grow here solely to donate to the Table and will give 100 percent of their yield," says Cooper. "Others keep more, because they are on a fixed income and experiencing food insecurity themselves. So there is an opportunity for empowerment as well."

In addition to growing food, the Sylva garden is growing awareness. As a formal community partner of Western Carolina University, where Cooper works as assistant director of the Center For Service Learning, the garden hosts WCU student volunteers looking to fulfill a class requirement, participate in a club or complete service hours, though Cooper says some come just to help and to learn.

"When I bring students here, we take some time to talk about the garden and its history," she explains. "We talk about where the food is going -- to support those in the community that are in need -- and we talk about organic growing.

"A lot of the students maybe haven't thought about food insecurity before," continues Cooper. "But you get them to the Table or out to the garden, and you see this look of 'Oh, wow.' You can see there's a realization."

Growing wellness: At Bounty & Soul, there is no stigma about food assistance, says founder Ali Casparian. "It's interactive and equal --lots of hugs, lots of 'how is your family?' When you come together to put time and effort into something, everyone feels special." (Photo courtesy of Bounty & Soul) 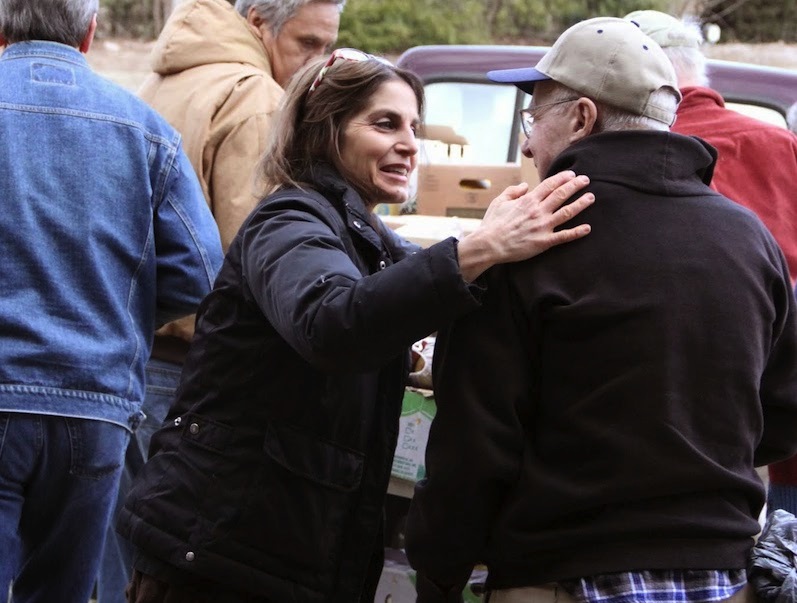 Growing wellness In the packed foyer of St. James Episcopal Church in Black Mountain, Winfred Shytle, 87, scans the words on the sheets of paper he's just received. He's reading about the health benefits of various foods -- beets, carrots and avocados, his favorite -- before making his way along the tables lined with fresh produce and bread.

"It shows you which foods are good for your heart, for your cholesterol, to help you make smart decisions," Shytle explains. "I've never seen a list so complete."

Shytle is attending Bounty & Soul, a pop-up market which distributes free produce at three Black Mountain locations. The market was launched by Ali Casparian after Black Mountain's Welcome Table, where she volunteered, dissolved last September. Bounty & Soul is one of 15 MANNA Markets, a pilot program launched by the food bank last year to better distribute perishable goods. It also receives food grown at the Dr. John Wilson Community Garden in Black Mountain and produce gathered by the Society of St. Andrew's gleaning network.

"There is so much food waste out there, and it's perfectly good produce," says Casparian. "So we're giving it purpose."

The market's three locations, including a day care and a senior housing center, are designed to reach out to those most affected by food insecurity: children, seniors and people on fixed incomes.

"When people talk about food insecurity, they think it's just about access to food," Casparian says. "But I think of it as access to good, healthy food -- food that promotes health and well-being -- because if you don't have healthy food it leads to malnutrition."

Bounty & Soul, says Casparian, emphasizes education and holistic healing. The market includes cooking classes and wellness demonstrations (including qi gong and yoga techniques) to promote social interaction. Casparian and her volunteers also provide informational handouts on nutrition, such as the one being used by Shytle, who is undergoing cancer treatments.

"I didn't cook much before, because I always relied on my wife to cook," says Shytle, whose wife died in 2011. "Now that it's just me, it would be difficult if this wasn't here. I enjoy what Ali teaches as much as I enjoy the food."

Casparian says there is a common misconception that people who receive food assistance don't care about a healthy diet. "And that simply isn't true. My clients go to the grocery store and they know they want to eat healthy, but it's still too expensive. It's a source of great frustration."

"I don't think the general population has an understanding of how hard it is to get something like fresh spinach for people who only have a $200 a month food budget," she says. "There's a lot of judgment about food assistance, but food is a birthright. It comes out of the ground -- it comes from God -- and we're all entitled to it."

Michael says Love and Fishes, whose small plot grows for the Downtown Welcome Table and provides easily harvested crops for passersby, isn't able to produce a great yield. Instead the garden focuses on creating a welcoming environment for its clients, many of whom are experiencing homelessness. "We wanted to create a garden where people can come and pick things at their leisure," she explains. "It's important that they feel like this is their garden, that they can come and access this."

For Michael, the final role of the garden is to facilitate a sense of community: creating a place where people from different walks of life work together toward a common goal.

"A lot of people, when they think about homeless people or see homeless people on the street, they just cringe and look the other way," she says. "But in the garden, all that is gone. When people work in the dirt side by side, there's no barriers, there's no prejudice, there's no haves and have-nots. It's a rewarding experience for everyone involved, because it washes away any preconceived notions."