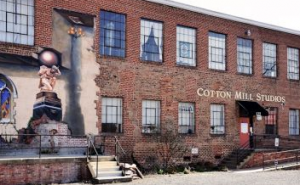 Two key buildings in Asheville's River Arts District have been sold recently. The buildings are long-time homes to artists, and they've been sold to new owners who are artists. That's a key point in the RAD, where development has been moving quickly. More on that in a minute. First, the sales:

The pair's affinity for recycled materials is apparent throughout the well-curated one-room space; with its golden-colored walls, comfortable sitting area, and vibrant paintings, the place feels more like a living room than a store. Earrings created from recycled garbage bags and decoupaged coins are showcased on a shelf Dominy created out of salvaged scrap metal from the Lower East Side, and Carbonell's paintings, made from squares of recycled linoleum, line the walls.

-Robert Street Studios: Another stalwart on the River Arts District Scene also sold. Owners William and Lynnell Goacher sold Roberts Street Studios to the owners of The Asheville Glass Center - Robert Gardner, Alex Greenwood and Logan MacSporran - who work out of the building at 140 Roberts Street.

The ashevillerad.com blog puts the sale into excellent context:

The transition of 140 Roberts Street from the Goachers to The Asheville Glass Center guys continues a legacy in the River Arts District that is little known but greatly appreciated! In the mid 1990?s, Bill & Lynnell Goacher, thru Willyng, Inc., bought a number of commercial buildings, providing reasonably priced space for artists & musicians, nurturing creative independent commerce of many kinds. Always interested in "raising up the neighborhoods" they invested in, the Goachers. in 2002, saw the wisdom in selling 115 to 129 Roberts Street, now known as The Wedge Studios, to sculptor, John Roy Payne. John, in turn, nurtured many young artists, again by providing very affordable live/work space @ Wedge Studios. In 2008, the Goachers sold Railside Studios to its anchor tenant, Matt Parris, owner of Roots Foods, enabling a national reach for our yummy local food. The Goachers are still partners in 2000 Riverside Drive, affectionally known as NORAD or River Arts District North. The ARAD offers a HUGE THANKS to Bill & Lynnell Goacher for their continuing vision, helping to support the cultural vitality of Asheville and beyond!

And regarding the fast pace of change in the River Arts District, consider the current construction of New Belgium Brewing's new $175 million brewery nearby, as well as the recent announcement that the Phil Mechanic Studios was for sale. It all adds up to continued, important, change in a district that is a major economic driver in Asheville. Background:

Asheville City Council is pumping millions of taxpayers' dollars into infrastructure improvements in the district as New Belgium Brewing begins construction on its new $175 million brewery just across the French Broad River from the RAD. Over the past couple of years, a couple of derelict buildings have been torn down, and a new ownership group took over the Wedge Studios, another RAD stalwart, and pushed out some artists while adding some new retail businesses, including a hair salon and a restaurant. Also, the building next door to the Phil Mechanic sold late last year for nearly $2 million to an architect in Hickory.