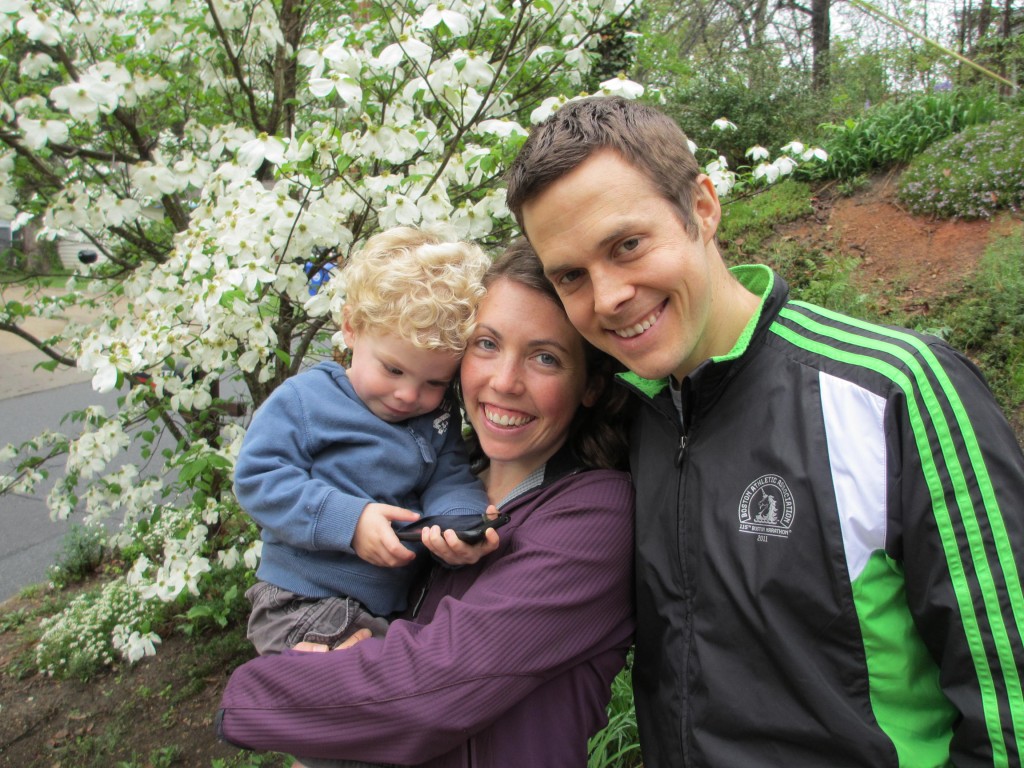 Happy so far: The family outside our new home in Asheville.

I'm writing this post from my brand new chair at my brand new desk. In my new office in my new home, in Asheville, NC.It all feels a bit weird, but in an exciting kind of way, just as this entire move has felt.

When we told our friends and family that we were moving eight hours away, to a small city in the mountains of western North Carolina where we didn't know anybody -- and without one of the standard reasons, like a job, that generally causes a move -- the responses varied pretty wildly.

Some people thought we were crazy. Some were sad (and of course, so were we to leave them).

But a few people told me how inspiring they thought it was that we would move so spontaneously, and not because we had to, but simple because we wanted to.

And that's why I'm writing this post about our move, and about Asheville. Not just to explain our reasons for moving, but to (I hope) inspire others who feel stuck where they are but are afraid to make a change.

You'll see that it's not terribly far off topic for No Meat Athlete, either -- as far as vegeterian- and vegan-friendliness goes, Asheville beats any other city I've ever visited.

From Baltimore to Asheville, via San Diego

2011 was the first year that I did any considerable traveling. I went to Austin, Portland, Cape Cod, Boston (twice), San Francisco, and San Diego, and discovered that the world -- actually, the country -- had a lot more to offer than did Bel Air, Maryland, the nice, suburban town outside of Baltimore where I grew up and had moved back to a few years after college.

And so we decided that we'd move. Maybe not permanently, but since running a business online affords us a lot of geographical freedom, it seemed a shame not to try living somewhere other than the default option before our son reached school age and we'd want to settle down.

The funny thing is that we were within one day of signing a lease on a place in San Diego, after several weeks of planning the move. But two things caused us to abort that plan at the very last minute:

Just two months ago, I hadn't heard of Asheville more than a couple of times. I knew it as a funky, hippie-ish city somewhere in North Carolina, and one that consistently showed up in those "Happiest Places to Live" lists that magazines and websites post every so often.

But the night we changed our minds about San Diego, Asheville was the first place I thought of as an alternative. (By this point, the idea of staying put after so much planning and anticipation wasn't one we were willing to consider.)

Two days later, I was in the car driving to Asheville, on a dual mission to check out the city and find a place to rent if it felt right. This was immediately following a 20-mile run, so I can't say it was the most enjoyable ride I've ever taken, but my mom came with me and helped out with the drive and finding a place. Thanks Mom!

It took a day for me to come to understand what it was about Asheville that made people so happy, but sure enough, I did.

The next day, I found a place to rent, and we signed a lease and made it official just two days later.

Here's what we love about Asheville so far, in our first week of living here:

Underlying all of this, there's a friendliness and slowness to the city that we're really enjoying. I'm one of the most  laid-back people I know, and yet in the coffee shops here, I feel like I'm the high-strung northerner who can't relax. But there's an acceptance of all different types of people ("It doesn't matter whether you're a businessman or a hippie," as one person told me).

All in all, it feels like this is a place where one can be centered, be creative, and find time to focus on things that really matter.