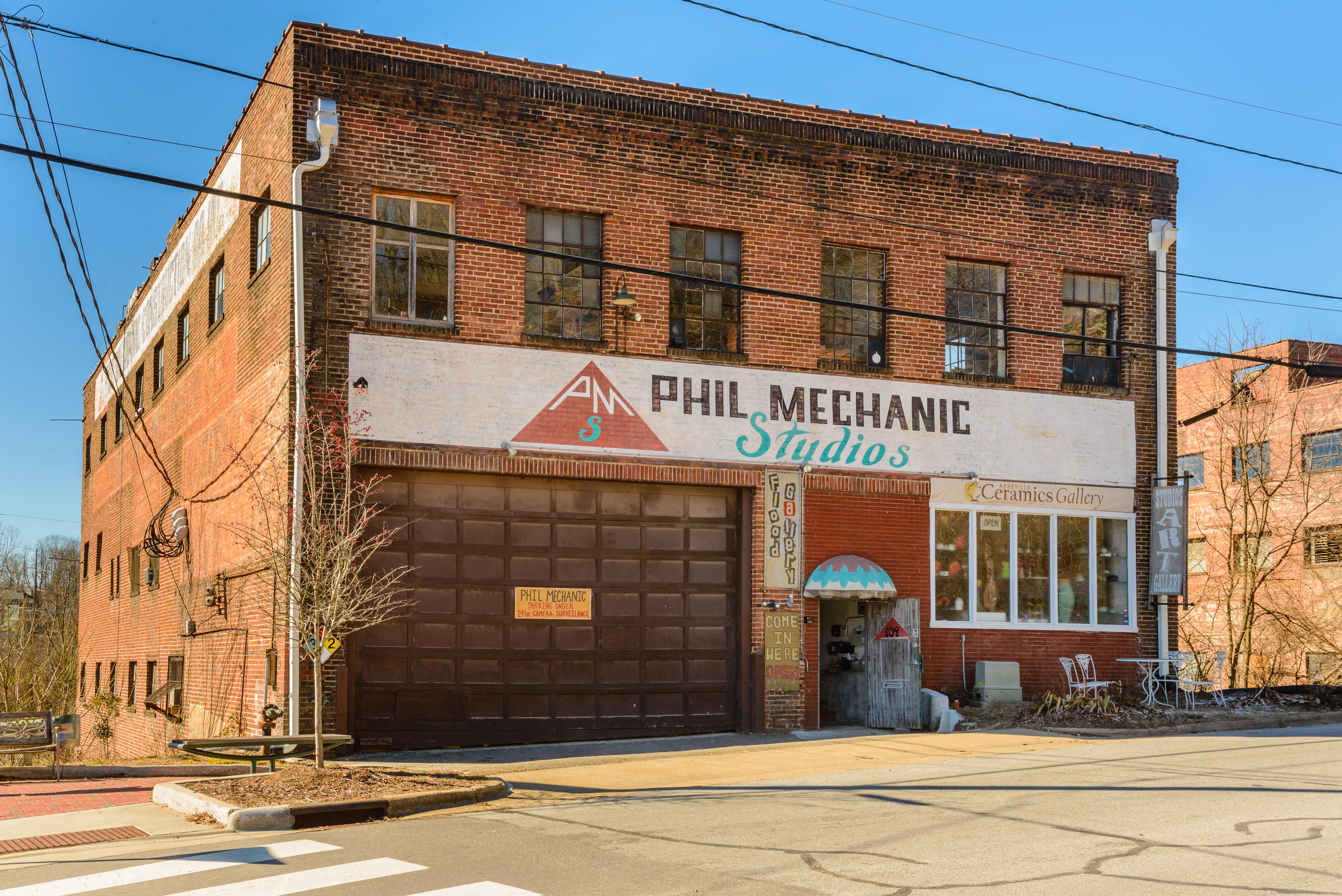 The Phil Mechanic Building, a longtime arts anchor on Roberts Street,  appeared on the front page of today's paper: Longtime owners, Jolene and Mitch Mechanic, have put the studio, gallery and meeting space up for sale.

In 2011, I learned a lot about this creative hive for a profile I did on Jolene Mechanic, an non-artist arts advocate, seen above walking through a dramatic installation in the Flood Gallery. She is a true homegrown hero, and a community-minded spitfire that I enjoyed getting to know.

Her story is intertwined with the Phil Mechanic building, so I thought it made sense to share some of the history of this building, as we continue to follow this story about changes in the River Arts District.

Here's some facts about the building from the story, followed by the full profile below.

It is politics and family. Fear. Love. Future and past. A thing becomes everything.

"Art is the perfect venue for conversation in a trying world," said Mechanic, who owns the Phil Mechanic Studio on Roberts Street with her husband, Mitch, and directs its nonprofit sister, Flood Gallery & Fine Art Center. "I don't want just beautiful things. Give me dialogue. Give me something that's disturbing that makes me think."

Give her brain fodder, not background music, she said. And she'll take it in her ever-busy hands, using it as a tool to transform, challenge minds and honor the hometown that grounded this gypsy soul.

The heart of her vision is the Phil Mechanic, a hive of 50 artists and workers with a journey representative of Asheville's new economy. Once a construction business hub, the abandoned siding and windows have been replaced with painting and pottery. A public library and glass workshop. A fashion designer and biofuel company truck drivers.

Mechanic dreams that the Phil Mechanic's mission of affordable work space and sustainable, supportive spirit can be a model for the rest of the community.

"I want to build a community that gets along and sustains itself," she said. "A community that supports itself and the education of our children. I know I can go into the Phil Mechanic at any moment and say I want to do this program, and the artists will roll their eyes, say 'Here she goes again,' and they will make it happen."

Mechanic, 54, is an arts advocate who isn't an artist, but she's drawn a clear, figurative circle in her life by connecting her past to present. Between cutting-edge gallery show openings, weekly potlucks and movie nights at the buzzing Phil Mechanic, she takes her arts education programs to area community centers like Eliada Homes, or what she simply calls "the farm" of her childhood.

Mechanic spent 10 years of her young life milking cows and devouring the biographies stacked in the library at Eliada Homes. Founded in 1903, Eliada is a nonprofit dedicated to child development, with both residential and day programs for support, treatment and enrichment.

"I like going back there because you try to give back something," she said. Troubled family circumstances brought Mechanic to Eliada in 1968, but she credits that decade of her life with the development of her driving, boundless energy.

"I got a good work ethic," she said. "It was a working orphanage. There was a farm, so we grew vegetables, we milked cows, all that. That work ethic that I learned very young carried through. Everybody looks at me like I am insane that I have this amazing amount of energy. But it's just a work ethic thing."

The calenders hung on the elevator doors in her office are stuffed with red-ink scribbles of her obligations of things to be done. Photographs of the things she has already done -- Reid Center after-school programming, the WNC Youth Outright prom -- frame her reminder of the days ahead.

Her time at Eliada also provided a perspective, an empathy that is articulated in her programming and her provocative art tastes.

"There are thousands, millions of kids who had it worse than I did, and they are out there today making something of themselves," she said. "I had food, and I had clothes, even if they were out of the missionary barrel."

But her dedication to children is not purely sprung from an obligation to repay the giving spirit that guided her upbringing. She uses "amazing" so much when she talks about children it's almost a synonym for young people in her language.

She thinks it's a "hoot" to do her Concept Camps, which teach philosophy through art. She struggles to suspend her joyous laughter long enough to tell the story of how kids identified Socrates and Plato when asked one afternoon.

"They said they knew of soccer teams and Play Doh," she said.

She delights in a child's imagination and believes they can change the world with their vision.

"You can get the conversation started with kids particularly because they have no inhibitions," she said. "They will do things that will astound you because they haven't gotten to the age where someone is pointing at what they are doing and saying, 'That's ugly, don't do that.'

"They just do the most amazing things. And (art and philosophy) teaches them confidence to ask the important questions. And then, maybe, they can grow up, and the world will maybe look different to them than it does to us."

Mechanic is a seeker, and her pursuit of knowledge and experience endows her a youthful curiosity. After leaving the Eliada farm to empty a bed for a new child in need, Mechanic traded the only streets she'd known for towns that were just words on a map.

She bought a camper and adopted her fearless four-legged companion, Tarheel, and spent her 20s traveling up and down the East Coast.

She went from Asheville to Maine to Nova Scotia, picking up temporary jobs answering phones and staffing a computer along the way. She ran out of road, traded the camper for a 40-foot cruise craft in Cape Fear and navigated the intercoastal waterways down to the tip of Florida. Tarheel remained her shadow on the boat and until her death 12 years ago.

"I had this little dinghy, and I would take Tarheel on it to the shore to walk her," she said.

After about 10 gypsy years, "I decided it was time to grow up and be a normal, responsible human being, and sold the cruise craft and was going home," she said. "Then a friend from New Orleans called and said I could go home after Mardi Gras. I came home three years later."

In 1993, the pull of her hometown was too strong to ignore, and when she returned to plant her roots, she reconnected with Mitch. He was the raven-haired pool shark she met when she was living next to Good Time Billiards in West Asheville. They befriended each other briefly before her East Coast exploration.

"We've known each other since crayons," she said. "I was working at a law firm at the time. And Mitch and I were hanging out, and I just thought we were pretty compatible. Let's give this a shot. We lived together for 10 years and then got married."

Another commitment emerged the year they were married: Mitch inherited the Phil Mechanic building. They embarked on a six-year renovation of the space that now houses 17 studios, two galleries and Blue Ridge Biofuels in the basement.

"At first, we just rented the studio space, but then Jinx (artist Sean Pace) came to me and said we should start a nonprofit and we could bring in artists from all over the country," she said. "I thought that was such a good idea ... who knew that it would take 80 hours a week and I was never going to get a paycheck."

At the same time she was helping artists pursue their dreams at their Phil Mechanic Studios in 2005, she eventually had the time and the money to pursue her dream of a college degree, she said.

One the eve of her fifth decade, Mechanic enrolled in the philosophy and literature programs at UNC Asheville.

"I was going to school and trying to get the Flood going. It was no sleep for years, I swear. I would finish here, go home and then hit the books," she said. "So when I graduated in 2010, everyone said they thought I would have more time. I use this time to sleep now from 2 to 6 a.m."

Some of the books she used in college line the shelves of the Phil Mechanic library. All of the titles are from Mechanic's personal collection.

"The library was created so that I could have room in my house," she said. "Mitch said it didn't look like I moved out any books, but I told him they were stacked two-deep now, not three-deep."

She reads two to three books a week, always before trying to get some rest. It's the way she turns off, she said, the only way she can escape the book she writes every day. Mechanic keeps a small blue notebook with her at all times to remind her of all the daily duties that she performs without pay.

But there are other rewards.

"I curated a show at Tryon Upstairs Art Space with Larkin Ford," she said. "A couple of woman were talking about one of his charcoal drawings of Jesus having a panic attack. I had to leave and I came back and they were still talking about it 15 minutes later. And I turned to Larkin, and I said, this is better than getting paid."

Favorite book: "Absalom, Absalom!" by William Faulkner. An avid lover of history, Mechanic wrote her thesis comparing this classic with "Gone with the Wind," which was published the same year. "It's not easy," she said. "Get the Cliffs Notes and read it along with the book."

In addition to its thousands of books on art, literature, poetry, philosophy and children's selections, the library offers free Internet access and two computers for general use.There's also a potluck lunch every Wednesday at noon and a free movie night every Friday at 8 p.m.

For More Information on the Listing Please Contact: Town and Mountain's Own Luiz Leonetti (828) 575-4428 Luiz@townandmountain.com