Share
From: www.foodandwine.com
The ingredients are local, but the chefs aren't:
Newcomers from all over--Brooklyn, Spain, India--are creating a world-class food scene in this small North Carolina town. 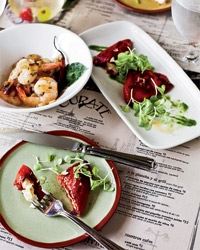 In Asheville, chefs from all over are creating a world-class food scene.
Photo © Peter Frank Edwards.

One of the reasons Asheville's outsiders give for their relocation to town is the scenery: Clouds comb out like low smoke over the mountains, the hills like tired, mossy stones. I decided that after visiting three breweries in one afternoon, it was time to get outside. Chef Katie Button admitted that, though everybody is theoretically excited about the outdoors, none of the town's restaurateurs ever have time to leave their kitchens.

At the tapas restaurant Cúrate (Spanish for "cure yourself"), Button understands how one could visit Asheville and stay inside: In her three years in town, she admitted, she's barely left the kitchen. The raspy-voiced former neuroscientist, who's been getting "cute as a" for as long as she can recall, was born in Conway, South Carolina. She trained at El Bulli in Roses, Spain; her husband and business partner, Félix Meana, grew up in Roses, where, as an 18-year-old, he opened a bar that became a hangout for El Bulli's staff. When the couple decided to open an authentic tapas bar in the US, Button was still working in Spain while Meana was launching a restaurant for chef José Andrés in Los Angeles. Button's mom suggested Asheville. Meana moved there (having never seen the place), and a year later, Cúrate was serving what's probably the best pluma Ibérica a las finas hierbas--a feathered loin cut infused with rosemary and thyme--outside of Catalonia.

Meana was a little worried about being treated as an outsider in the South, but he soon found that pretty much nobody in Asheville is actually from Asheville. This isn't anything new. The town owes its monuments to visitors gone native: In 1895, George Vanderbilt used his railroad fortune to create the Biltmore, a self-sustaining high-country redoubt for an artistic soul grown weary of city distraction. Eighteen years later, E.W. Grove, chronic hiccups sufferer and medicinal-tonic magnate, established the Grove Park Inn as a mountain refuge from industrial toxins.

Perhaps some recent arrivals come for the recuperative benefits of the mountain air, but most of the people I talked to came for the vibe. The most common description of the town's ambience is "funky," which was borne out by even the briefest stroll around. In the town square was something called the Rural Academy Theater--really an empty stagecoach where actors perform. Nearby, a local artist painted to music in front of an audience.

A better metaphor than funk, however, might be ferment. Asheville has one of the country's premier beer scenes, as evidenced by the breweries I visited, including the newest, Wicked Weed, with its great open-vat fermenter, and the local favorite, Green Man, known for a hop-forward IPA and a lively tasting room. Then there's the new factory at French Broad Chocolates, where owners Dan and Jael Rattigan start with cacao beans that have been fermented to their specifications in Costa Rica and Peru. Theirs is a fully functional bean-to-bar operation; using some Internet pictures and PVC piping, they hand-built a machine that separates the nib from the cacao bean shell. They are also committed to supporting the local food community. The Lapsang souchong they use in one of their chocolate bars, for example, comes from the tea shop down the street.

Jacob Sessoms, chef and co-owner of Table, the eight-year-old restaurant credited with helping to usher in the new food era, likes to say Asheville was into local long before local was the fashion. The townspeople demand to know where their food is coming from, he says, and more than 90 percent of his menu is from the region. His dishes taste like the Old South via Brooklyn, where he lived and worked for a few years. He garnishes his Bloody Mary with a crisp strip of maple bacon and pickled okra, for instance, and serves his oxtail ragout on a johnnycake waffle. It's hard to miss Brooklyn's hyper-artisanal influence in even his simplest dishes, like an appetizer of house-cured coppa with pear and mascarpone cheese served on a house-made bagel. (And even the snobbiest New York City bagel connoisseur would concede that it isn't at all a bad bagel.)

Also at the forefront of Asheville's food movement is the four-year-old Cucina24, where chef Brian Canipelli fries grouper collars in a buttermilk batter, like chicken. Another important figure is David Bauer, of the bakery Farm and Sparrow, who uses heirloom grains native to North Carolina. He hails from Milwaukee via the Twin Cities; the brick oven in his garage was built by a friend from New York; and he imported the stone mill in his shed from Austria. His rye bread, sold in mahogany-colored bricks at farmers' markets throughout the area, uses the local, colonial rye to deliver the earthy flavors of the Tirol. Meanwhile, Sessoms has just opened The Imperial Life, a cocktail and charcuterie bar, because all the like-minded restaurant transplants needed a spot to hang out together after their own places closed for the night.

These chefs are certainly into the concept of local, but it's a specific brand of local, one that prizes the immigrant imagination as much as the tailgate farmers' markets. Prime examples of this are Meherwan and Molly Irani, who opened the new MG Road, a stylish basement bar below their Indian street-food joint Chai Pani. Their cocktail menu combines Indian flavors with whatever local ingredients are on hand. The gin fizz relies on Indian Kewra water, a floral essence evoking jasmine, and the Desi Daisy balances Herradura with lemon, garam masala (toasted and ground from whole spices) and house-made cardamom bitters.

In the end, what's quintessentially local in Asheville is a kind of shared resourcefulness: Most chefs use the same accountant, and their mushrooms come from the same foragers. They've had an impact on each other, too. For instance, Button wanted to make an esqueixada, a traditional Catalonian dish of salt cod crudo on a tomato puree with sweet onion and black olive. But she'd heard about some good trout from an up-country fishery, so she used that instead. Cúrate's exquisite esqueixada de montaña ("of the mountains") has the smoky lightness of the highland rivers set off against Mediterranean flavors.

The Iranis were so impressed with the taste of this dish that they put the same smoked trout on the bar menu at MG Road (with mango on puri crackers). Button was delighted, and felt as though she'd repaid a debt to Meherwan: He'd previously suggested that she give up her spice mixes and instead toast whole spices, and he'd even given her a lesson in his kitchen. These chefs may be new to town, but they've built a community. They're locals now.

At Green Man, one of Asheville's more established breweries, the tasting room is a local hangout where visitors eat pretzels and watch the brewers work. 23 Buxton Ave.; greenmanbrewery.com.

Small-batch beers from this new brewery (like a hoppy brown ale and an open-tank fermented saison) are only available at its in-house pub and restaurant. 91 Biltmore Ave.; wickedweedbrewing.com.