There's No Environment Too Hostile: The Most Unusual Urban Gardens 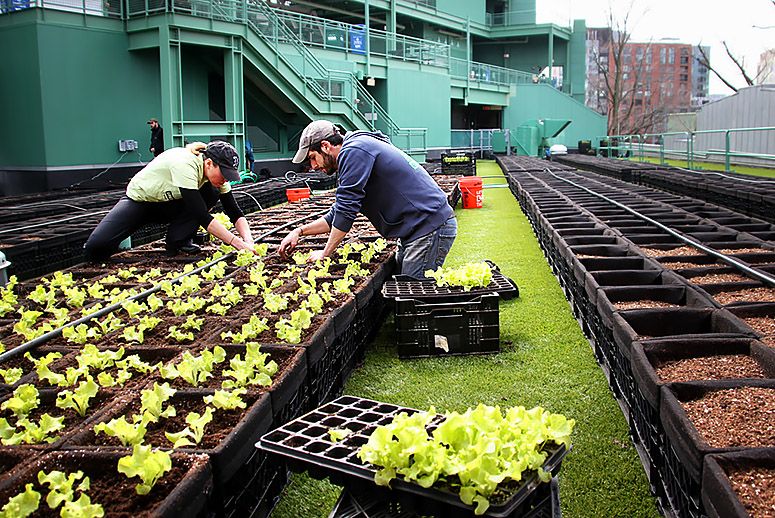 Hotdogs and beer may define the ballpark culinary experience, but the San Francisco Giants want to give fans greener and healthier options. On Tuesday the team's home base, AT&T Park, unveiled a 4,320-square-foot edible garden. The coffee ground-fertilized garden uses 95 percent less water than regular methods and will supply concessions stands with kumquats, tomatoes, kale, and other produce. Patrons will be able to picnic in the garden and enjoy an onsite bar. 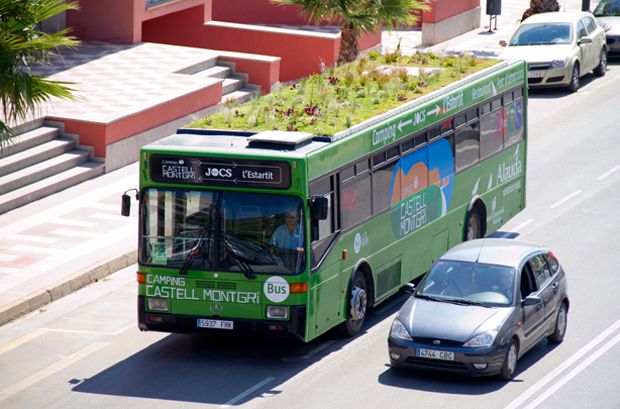 This eco-bus, dubbed the "Phyto Kinetic," was designed by landscape artist Marc Grañén of Barcelona, Spain. Grañén created the new take on a rooftop garden in an effort to energize public buses with life, improve the urban ecosystem, and purify the air that city slickers breathe, according to Urban Gardens.

On a Floating Ship Crane

This garden is located on an abandoned ship crane in the Belgian port city of Antwerp. It was built by the Belgian art collective Time Circus. 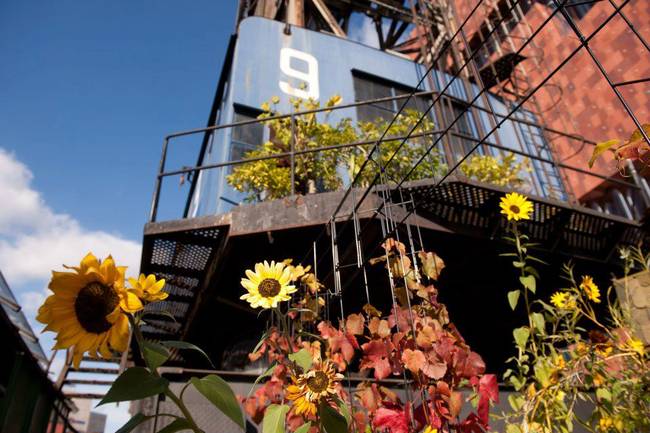 green space in the Belgian port city of Antwerp for instance -- built by Belgian art collective Time Circus, it's been placed on an abandoned ship crane, and outfitted with a treehouse made out of recycled materials, and even has a chicken coop.

On a Pickup Truck

This pickup grows herbs on wheels. The lively flatbed cruised around as a promotion for Truck Farm, a Wicked Delicate Films documentary about New York City's urban agriculture. 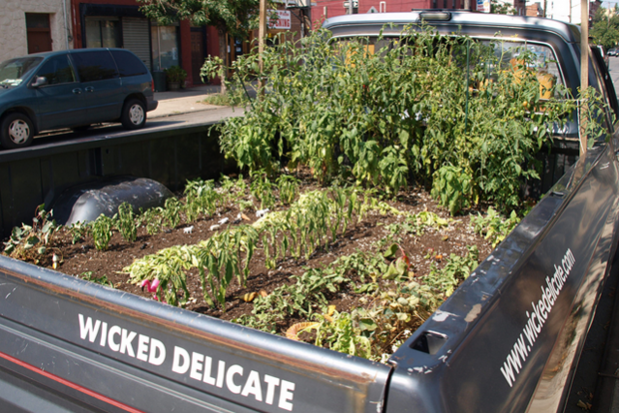 Check out this cool time-lapse video of the making of this garden!

Talk about a perfect way to bring the urbanite flora and fauna together. This doghouse sat in the Coastal Maine Botanical Garden as part of the Garden of Five Senses exhibit. 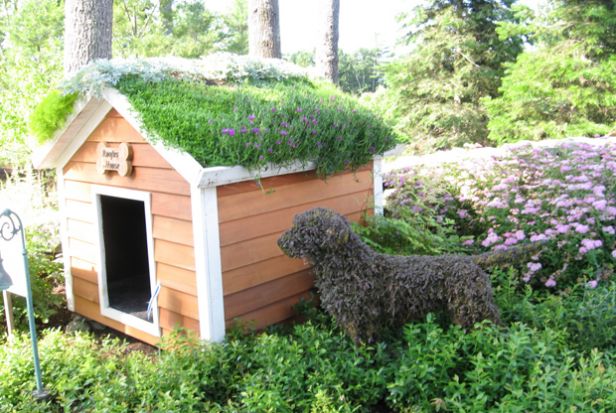 In an Old Piano

This vintage baby grand piano was converted into a fountain and garden planted with waterborne flowers and vines. 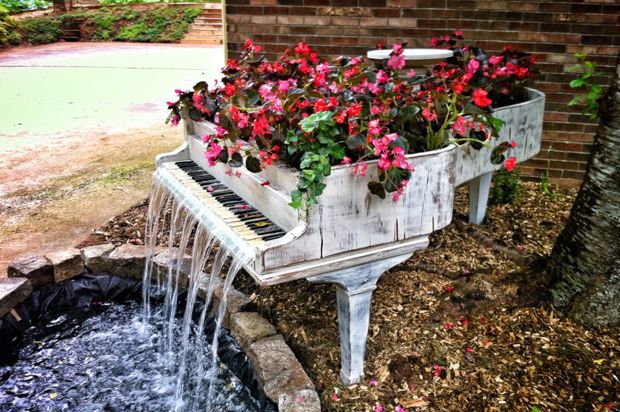 This hanging, drought-tolerant succulent garden is built in a recycled window shutter taken off an old home. 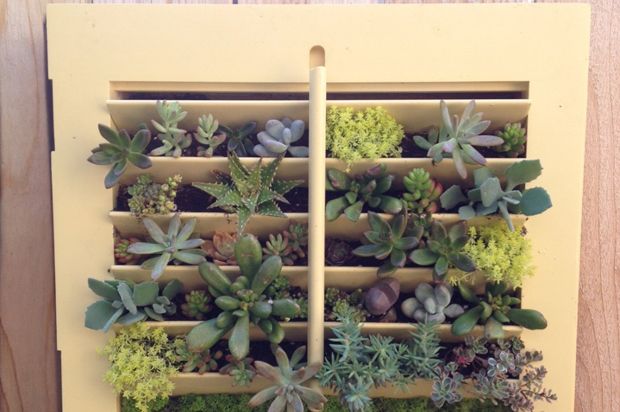 Landscape architect Jeni Webber crafted this Palo Alto driveway. Webber planted flowers, herbs and small shrubs low enough to the ground so that the driveway garden would be both ecocentric and functional. 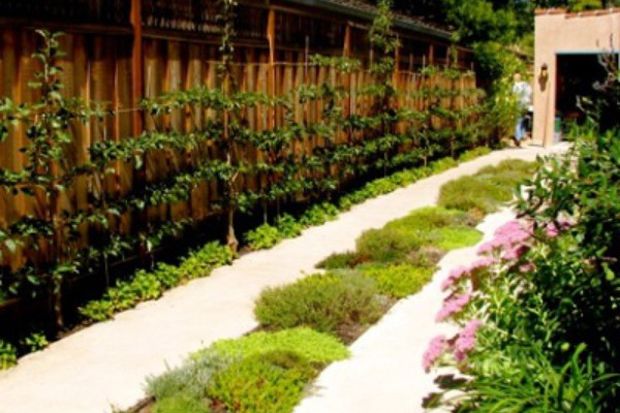 St. Luke's Hospital started sending all new moms home from the hospital with a basket of fresh produce, recipes, and literature about the importance of a healthy diet.

All of the produce in the basket was grown on an organic farm on the hospital's Anderson campus in Bethlehem, Pennsylvania. The hospital--part of a six-campus network--has been running a farm on the 500-acre grounds since 2014. 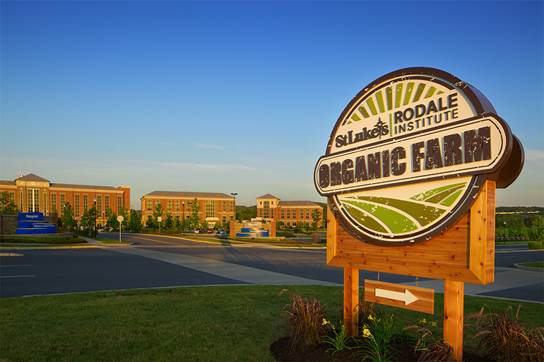 "Our mission is to provide great healthcare and part of that is educating patients about the benefits of a plant-based, organic diet," explains Ed Nawrocki, president of the Anderson campus. "One of the best ways to do that is to lead by example and show them how delicious produce grown on our farm tastes.

And then it gets really strange... 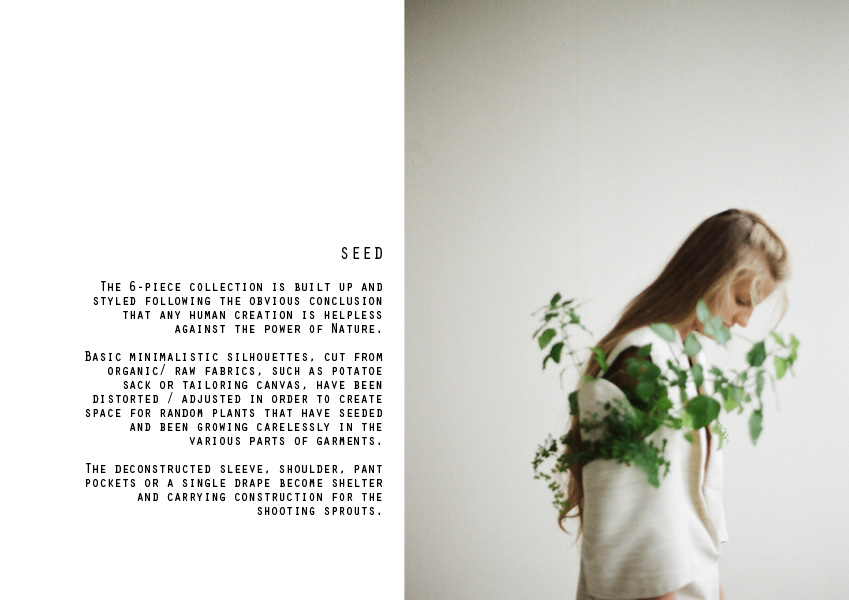 You can be a walking human planter with garments from designer Egle Cekanaviciute's six-piece Seed Collection. This series of pants, dresses, tops and more comes with specially-designed pockets that can be filled with soil and fertilizer, so you can grow the plants of your choice. "The collection is styled following the obvious conclusion that any human creation is helpless against the power of nature." 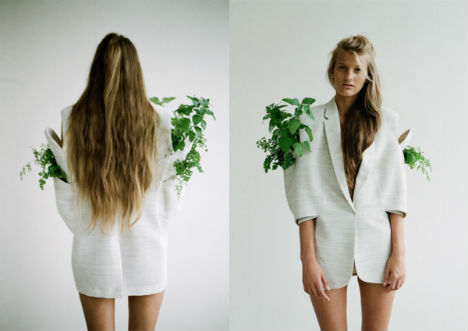 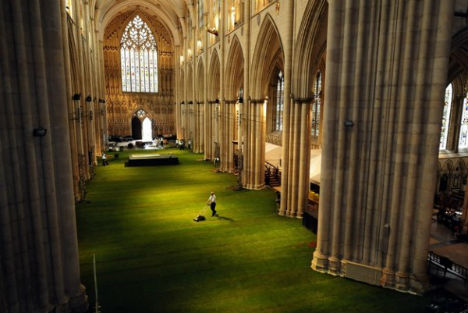 England's York Minister cathedral was temporarily filled with a real, living lawn that was grown on recycled felt and then installed in successive layers. The whole installation measured an amazing 1,500 square feet - and yes, it continued to grow while it was inside the church, requiring mowing! The grass was put in place for the Queen's Diamond Jubilee. 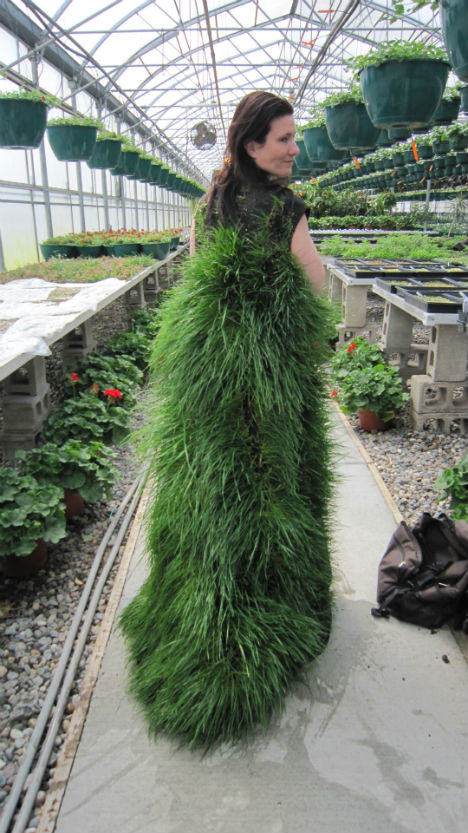 Stevie Famulari, an assistant professor at NDSU's landscape architecture department, has created five stunning garments including an opera gown, a wedding gown, a laced gown, an asymmetrical gown and a lawn coat that are seeded with living plants. Lined with waterproof material and totally wearable, these garments will continue to grow and change over time. 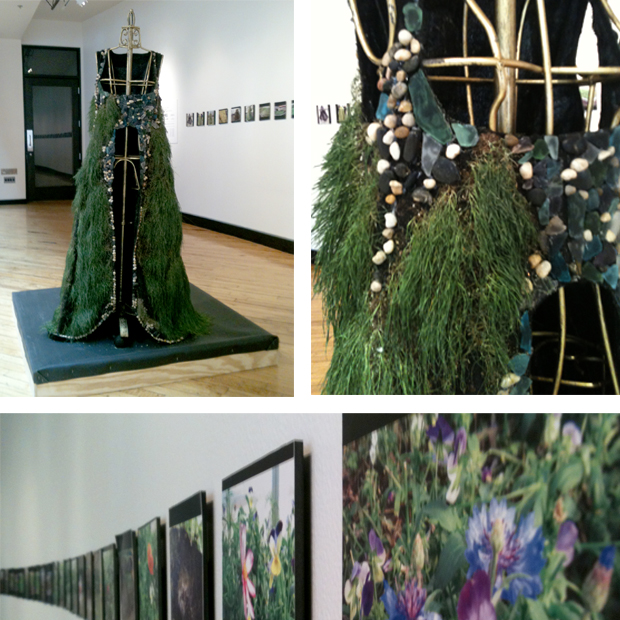 In an Abandoned Underground Bank Vault 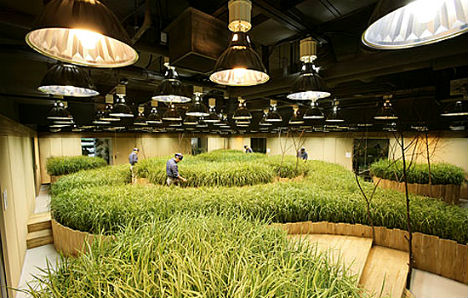 Would you ever expect to find a food-producing garden in an abandoned underground bank vault? Pasona 02 is a real working farm measuring one square kilometer, located beneath the streets of Tokyo. Not only does it grow food in a city that has a low rate of food self-sufficiency, it also employs jobless youth and prepares them for work in the agricultural industry.

In Jewelry & On Bikes 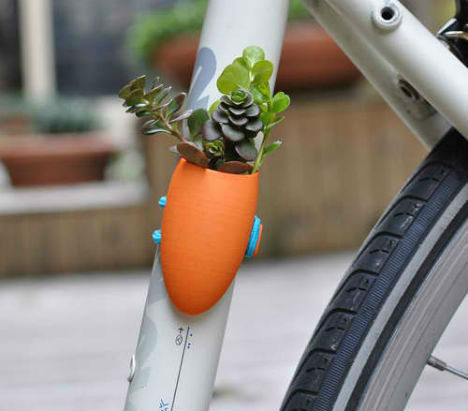 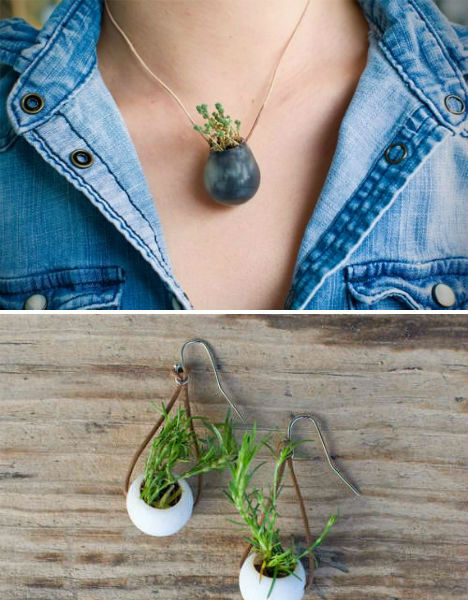 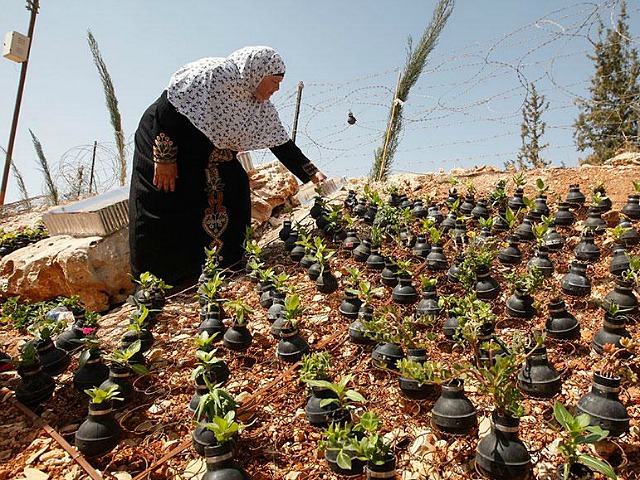 In the Palestinian village of Bilin - near the West Bank city of Ramallah - residents have planted flowers in hundreds of spent Israeli tear gas grenades collected after clashes with Israeli security forces.

The garden is "meant to show that life can spring from death."

Last and without doubt not the least weird... 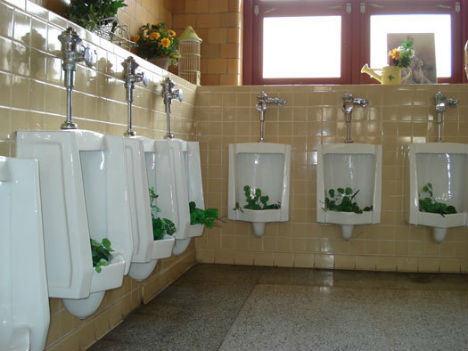 The men's room of a former elementary school that now serves as a charter high school for young mothers and pregnant teens has now been put to a rather unusual use: it's a garden. The school's grounds also feature a four-acre urban farm which helps teach the teens about gardening.